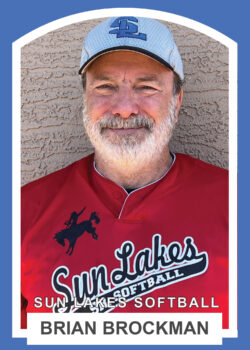 This is the story of the “Jurassic Narc,” a nickname fondly bestowed upon Brian Brockman by his younger co-workers at the Drug Enforcement Administration (DEA) where he spent over 24 years as a Special Agent. But, first, some background information …

Brian is a Bah-ston-area native, graduating from Framingham North High, where he was on the Spartans’ lacrosse, soccer, and wrestling teams. He then attended Northeastern University for a year before joining the Marine Corps and serving for nearly nine years as a machine gunner. His basic station was Camp LeJeune, but he also spent three years in Japan and had shorter tours in Lebanon and Honduras. While in Japan, he married a fellow Marine, and they later had two children. After his service, he earned a degree in international economics at Framingham State University.

Before deciding on a long-term career, Brian decided to do a “give-back” year by teaching in a local grade school, where his principal was the same man as when he attended that school! He then began his career with the DEA. During his 24-year stint, he had assignments in Boston, Houston, Panama City, Tucson, Salisbury (Md.), and, finally, Phoenix. As a Special Agent, Brian had an interesting, but hazardous job. DEA agents operate within some of the most dangerous criminal environments imaginable, pursuing drug traffickers and terrorists while doing undercover assignments, wiretapping, and other investigative work. He said his most interesting “bust” involved raiding a multi-million-dollar mansion in Houston where it was suspected that a group of Columbian drug dealers operated. Upon entering the mansion, there was no furniture other than two lawn chairs and a large-screen TV. There were two suspicious Columbians, but no visible drugs. One of the agents with Brian suspected something and chopped a hole in the drywall, where it was discovered that nearly the entire house had a “double wall” concealing over five tons of cocaine! Quite a bust!

The DEA has a mandatory retirement age of 57, so Brian, the “Jurassic Narc,” retired eight years ago. He says that the age limit makes sense since Special Agent work is a young man’s game. It’s difficult for older guys to run down the bad guys and kick open doors! Brian did consulting work for a few financial institutions for a couple years, doing money-laundering investigations, before fully retiring. He’s now focusing on softball and golf instead of the bad guys. Last year was his first in our league, and he led the Lakes Division in home runs with 29 and had the fifth highest average (.721). This year he’s been “promoted” to the Sun Division.

Brian and his wife Felicia have been married 20 years and have a blended family of four children. They enjoyed hiking until Felicia broke her foot playing pickleball. They also like exploring area sites and going to new restaurants. Brian takes online courses focusing on international politics, history, and religion. Maybe politics should be his next adventure! Secretary of State?