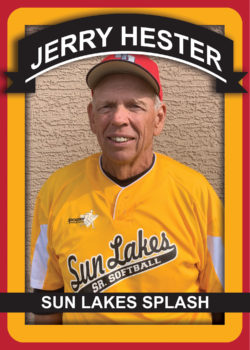 Minutes after he smashed a long grand slam homer that iced a recent win for his team, I sat down to interview Jerry Hester. Jerry’s a modest guy and not one to boast, but teammate Larry Kaufmann walked by and said, “Tell him about the Vegas tournament when you hit 11 homers!” As you might guess, Jerry’s a really good softball player and has played “forever,” starting in fast-pitch leagues and transitioning to slow-pitch over the years. He’s played on nine world championship teams and continues to play tournament ball, in addition to playing in our league. He hits for both power and average and is a solid defensive player as well.

“Born and raised on a tractor,” Jerry’s a farm boy from West-Central Indiana where he worked on the family farm until his dad sold the homestead before Jerry’s junior year in high school. He graduated from New Market High where he played baseball and basketball for the Flyers. Jerry briefly attended Indiana State University before marrying Dorothy, another New Market alum, in 1967. He worked as a mechanic for a while before returning to ISU, earning a BS in Business Management. Jerry later attended grad school at Ball State.

Jerry spent most of his career working in Columbus, Indiana, as a Computer Systems Analyst for Cummins, Inc., a Fortune 500 company that designs, manufactures, and distributes diesel engines, filtration, and power generation products. After 27 years with Cummins, the company encountered a major financial downturn, resulting in massive layoffs, including Jerry. He worked in park maintenance for a while before being hired by the Clark County (Nevada) School District in Las Vegas, again as a Computer Systems Analyst. He spent the final eight years of his career with them.

The Hesters retired in 2011 and moved to Arizona, primarily to be close to their son Tim, daughter-in-law Christine, and two granddaughters Alexa (12) and Jennah (10).

Jerry grew up a Brooklyn Dodgers fan back when it seems they went to the World Series every year. That led to a lifelong hobby of collecting baseball cards and other baseball memorabilia. Jerry’s collection includes every Dodgers team back to 1946. His oldest card is a 1941 Pee Wee Reese. Jerry and his son have attended numerous baseball card shows over the years. He also has an “autograph collection” obtained primarily by attending Dodger Spring Training games in Vero Beach. Another big thrill was his participating in a Dodger Fantasy Camp and getting to meet many of the old-time Dodger greats.

Dorothy and Jerry enjoy traveling by car. They’ve been pretty much everywhere in the Western U.S., focusing on historical spots such as the Oregon Trail, Indian battlegrounds, national parks, and other “Old West” sites.

Collecting old metal farm toys is another of Jerry’s hobbies. He attended many farm toy shows and auctions while living in Indiana. He explains his continuing interest by saying, “After all, I still have farm dirt under my fingernails!”