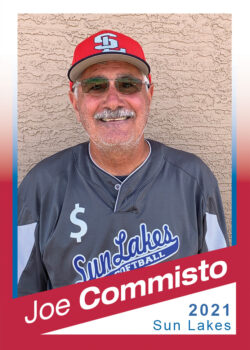 From playing stickball in the streets and school parking lots in Queens, N.Y., as a youngster, to playing slow-pitch softball in our Sun Lakes Senior Softball League, Joe Commisto has usually had some type of bat in his hands. He played on many softball teams well into his 50s before taking a brief hiatus due to work requirements. He then unretired and joined our league four years ago. At press time, Joe, a sweet-swinging lefty, was hitting around .600 and was in the top 10 in several other offensive categories.

Joe began his career in the commercial construction industry with the State of New York as a construction manager working on state office buildings. After five years, he relocated to northern California, where he became VP-Construction for Lincoln Property Company. (As an aside, Joe had tired of the “big city” and had traveled extensively in the West, so when the opportunity to “go West, young man” surfaced, he was ready to move on!) He’d remain in California for around 16 years, working on major office buildings and apartment complexes.

In 1994, Joe accepted a position as Divisional President for the GH Group in Phoenix. Four years later, he moved on to Summit Builders, a major developer of commercial properties, including hotels, apartments, senior living facilities, and Fry’s grocery stores. He completed his 47-year career in construction management with the Wolff Company, a Phoenix-based corporation focusing on the construction of multi-family dwellings.

Joe has two daughters and one grandchild. Jennifer lives in Ahwatukee, while Stephanie is in Texas. Joe coached both girls’ Little League teams and umpired Little League and Pony League games for many years back in California.

Joe met his wife Becky in 1998, and they married in 2004. Both Joe and Becky are avid golfers, with Becky being “really good,” having recently won the President’s Cup in her division. The Commistos enjoy long, annual getaways to Oregon in their large RV. They have a site at the beautiful Pacific Shores Motorcoach Resort in the Pacific Coast town of Newport. They do a lot of summer golfing while there, where the average high temperatures are 40-plus degrees lower than here!

World War II history is another of Joe’s passions. Both his father and an uncle were WWII vets, which piqued his interest and made him a self-professed WWII history buff.

Joe’s only a couple years into full-time retirement, but he says he’s already pretty good at it! Post COVID, he’d love to visit some of the major WWII battle sites, such as Normandy, and maybe places in the South Pacific, where his father served.