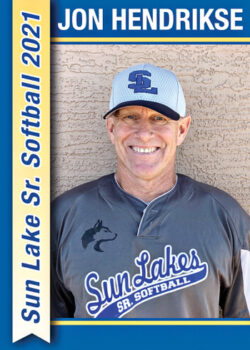 Jon Hendrikse hails from Badger Country. A native of Madison, Wisc., Jon graduated from nearby Monona Grove High School where he played “some football,” but spent most of his time on the baseball diamond. He played four years for the Silver Eagles while also playing American Legion ball in the summers. Normally playing centerfield and batting lead-off, Jon was the “table-setter” for both teams.

He next played baseball at Calvin College (now Calvin University) in Grand Rapids, Mich. After two years playing for the Knights, he decided to concentrate on his studies and enrolled at the University of Wisconsin-Eau Claire. He earned a B.S. in business information systems there.

His early career was primarily spent in programmer analyst positions, working with mainframe computers. He held programmer analyst positions at General Dynamics in San Diego, then relocated to the Phoenix area, working for Motorola and later for the Arizona Public Service Company (APS). After 10 years with those companies, he transitioned into sales, working for Mylan Labs, a pharmaceutical and medical devices company. That position required lots of travel throughout the Western United States.

After nine years with Mylan Labs, Jon’s life changed. Becoming a single parent, Jon couldn’t continue traveling while raising four kids, so he accepted a position as a vocational counselor in the Special Education Department in the Tempe Union High School District, counseling kids with special needs and helping them transition into productive citizens. Jon says it’s the most rewarding thing he’s ever done, by far! Jon continues that work today.

Jon’s “kids,” twins Austin and Hailey, are 23 and both working in Chandler, Preston is 21 and a student at San Diego State, while daughter Julia, 18, is a senior at Seton Catholic High.

Jon played softball from his late teens until he was 54, then took time off to concentrate on raising his family, including coaching Austin in Little League through high school baseball. Jon soon returned to the diamond and has played on several senior teams, including tournament teams. In addition to playing in our Sun Lakes League, he plays in the Tempe City League where he is a teammate of son Austin. He says he’s the oldest player in that league … without a doubt! In our league, Jon’s a smooth-fielding, strong-armed shortstop who also hits for both power and average.

Long-term friendships, good memories, and the camaraderie are what Jon loves about softball. In fact, he and a group of friends and teammates have played in a Labor Day tournament in Lake Tahoe for 33 years. For many, it’s the only time they see each other all year, but softball always brings them back together.

It’s not all softball, though. Jon’s into pickleball, snow skiing, water skiing, and fantasy football as well. And, of course, he’s a “youngster” and is still working. He says helping those “at need” kids is what truly keeps him young.