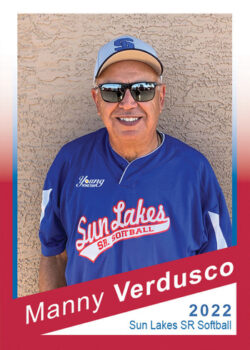 A native Californian, Manny Verdusco grew up in Norwalk in LA County, graduating from Excelsior High where he played baseball for the Pilots. Baseball and softball have been a big part of Manny’s life since Little League. He’s played on many teams in various city leagues and on several tournament teams, earning a World Championship ring at the prestigious Huntsman Games, held annually in St. George, Utah. Today he’s in his second year of Sun Lakes softball and was sporting a .702 batting average at press time, good for 5th in the league.

Manny is a self-professed “military junkie.” He joined the Navy after high school, serving his country for eight years, including deployments in Japan and Vietnam, as well as various bases in California. In fact, he served three tours in Vietnam: one at Cam Rahn Bay, then two at Vung Tau. Manny served as Petty Officer-First Class, specializing in PBR (Patrol Boat: Riverine) repair and maintenance. He earned a degree in mechanical design at Cerritos College, attending school part time while still serving in the Navy. He later earned a B.S. in business administration at the University of La Verne (Calif.).

His non-military career included stints with several companies, primarily in corporations related to military support and the aerospace industries. His first job was as a machinist with Pacific Pumps. He then worked for Western Gear for eight years where he had positions as pricing estimator, proposal manager, and program manager. He then became a senior estimator at Kaiser Aerospace before leaving California in 1995 to accept a position as senior contracts manager at UTC-Aerospace in Phoenix. Manny then worked for General Dynamics before “taking off” for about two years. He was lured back to the workforce by Iridium Satellite Communications in 2011. He’s still working for Iridium as senior manager-government contracts. Manny has a Secret Clearance designation at Iridium, so he can’t disclose a lot about what he’s doing there.

Manny and his wife Sue have a blended family of three young adult children and two grandkids. Daughter Maddy is serving in the Army, Maigen is a high school senior, and Matt is a programmer analyst for Sprouts. Sue and Manny both play a lot of golf and tennis, and he’s just getting into pickleball. As a younger man back in California, Manny was a competitive water skier, winning several trophies in his age group brackets. He also has a keen interest in military history, especially World War II and, of course, the Vietnam War.

Sue and Manny enjoy annual getaways to Hawaii. Their current favorite spot is Maui. Additionally, they like to vacation back in his home state, especially to the Morro Bay area. Manny did a lot of international travel during his work career, so he’s happy to stay in the good old USA now.

Manny is driven by his love of country and family and his support of the military. He believes the USA is the greatest country on earth, despite a few flaws.