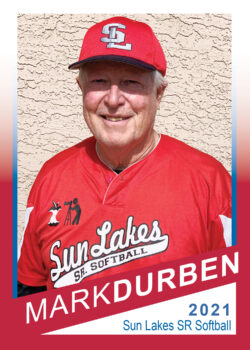 As a young man, Mark Durben admits that he got in with the “wrong crowd” back in his hometown of Racine, Wis. He worked at jobs in a foundry and snowblower plant after graduating from Horlick High in Racine before deciding at age 23 that he needed to escape. As a self-professed “hippie,” he decided to head for Mendocino, Calif., where he joined a Zen Buddhist Cult. (That’s definitely an escape from Wisconsin!)

After four years living in a commune, Mark decided to return to a more traditional lifestyle. He relocated to Arizona in 1976 where his parents and sister Patti lived. He soon thereafter enrolled at Phoenix Community College where he earned an associate degree in liberal arts. After graduation, he decided to turn his interest in photography into a career. He started doing freelance work for Ray Buse Printing and Carvalho Publishing, as well as some modeling schools. In 1980 he was hired by SRP in their Public Relations Department. This would turn into a 25-year career where he “focused” (that’s a pun!) on his photography skills. He provided photos for SRP’s internal and external publications, engineering studies, and historical archives, among many other projects. He retired from SRP in 2005.

While still at SRP, Mark became very interested in the Ministry and ultimately earned a bachelor’s degree in practical ministry with an emphasis on biblical counseling from Masters Divinity College. This led to several Christian “part-time” roles, including Elder and Pastor at Pipe Jar Fellowship, a Men’s Bible Study Leader at Chandler Bible Church, and a Pastor in the Prison Fellowship Program which ministers to inmates at Florence Prison and other locations. He also currently does livestream ministry work for the Adobe Youth Prison. He says this avocation is the most rewarding thing he’s ever done.

Mark and his wife Betty have been married for over 23 years. Mark has three children and three grandkids from his first marriage. The kids and grandkids live in Arizona, California, and Washington, while Betty’s family is from Minnesota, so, in normal times, there are a lot of family trips to those locations.

Mark and Betty are involved in several couple’s activities, including fishing (Mark’s into bass tournaments), hiking, bowling, and backyard cornhole. Betty’s also into pickleball, while Mark’s in our Sun Lakes Softball League. Mark recently returned to softball after being sidelined for about 10 years with back issues. He had played for many years in SRP’s Industrial League, and in some Mesa leagues before moving to Cottonwood last year. Mark’s one of the more versatile players in our Lakes Division, being equally adept as an infielder or pitcher. He’s also one of our top hitters, with an average of over .700 during our most recent season.

To say that Mark has led an interesting and varied lifestyle may be an understatement. From a midwestern kid in Wisconsin, to a Zen Buddhist in California, to a corporate photographer and Christian Minister in Arizona, it’s been quite the journey!