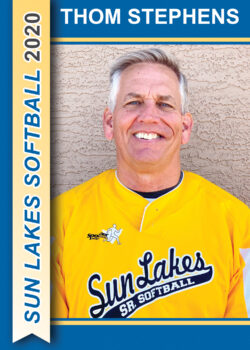 Ask any of the guys at the Field of Dreams to describe Thom Stephens, and the most likely responses are, “really good player” and “really nice guy.” Thom’s probably prouder of the latter.

A Santa Clara, Calif., native, Thom graduated from Buchser High where he played both varsity baseball and basketball for the Bruins and also earned academic honors. He was a four-year letterman in basketball, and the all-time scoring leader in the Santa Clara Valley Athletic League. His basketball prowess earned him an athletic scholarship to the University of Puget Sound, a private university affiliated with the United Methodist Church in Tacoma. Thom was a three-year starter for the Loggers and earned a degree in Communications along the way. However, the best thing about his time at UPS was meeting Alyson, his wife-to-be. They dated throughout college and were married during the basketball team’s winter break during Thom’s senior year.

Upon graduation from Puget Sound, Thom entered the Luther Seminary in St. Paul, Minn., graduating in 1984 with a Masters of Divinity degree. His first pastoral calling was to Calvary Lutheran in Scottsbluff, Neb. He then was pastor at Ascension Lutheran Church in Scottsdale before being called to be the first full-time pastor of the Central Lutheran Church in Arizona City in 1992. Under his leadership, the congregation grew over the years. A second worship site was opened in nearby Casa Grande in 2009. Community outreach programs were established, including a child care center, adult education tutorial programs, and ESL (English as a Second Language) classes to serve the surrounding community. After nearly 28 years at Central Lutheran, Pastor Thom retired this past April.

Since the ministry is pretty much a 24/7 profession, Thom is still learning how to transition to the life of a retiree! Alyson is still working in her business as a learning consultant for corporate training, so they’re not completely “free” yet. And, of course, the pandemic has put a hold on potential travel and other activities.

Married almost 41 years this December, Thom and Alyson have three adult children: daughter Kirstin in Albany, N.Y.; son Jordan in Phoenix; and daughter McKynzie in Bend, Ore. They have one granddaughter, Teya, in Albany. Other family are “scattered” from California to Colorado, so future plans will include more family visits.

Thom is one of the top players in our Sun League, finishing in the Top Ten in nine offensive categories during the 2019-2020 seasons. He hits for both average (finishing 6th) and power (#4 in homeruns).

Besides softball, Thom and Alyson enjoy backpacking, hiking, and bicycling. Thom used to golf and may take that up again. He’s a left-handed batter in softball, so that won’t mess up his right-handed golf swing!

The late Brooklyn Dodger Manager Leo Durocher, when talking about the rival New York Giants, once said, “Nice guys finish last.” That certainly doesn’t apply to Thom; in his case, “Nice guys finish first … or at least in the Top Ten!”