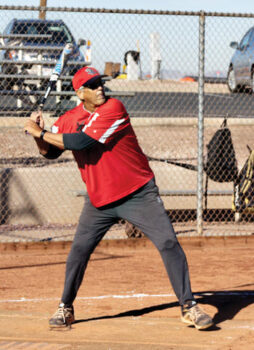 For the first time in several years, there were no new individual batting records set during the 2021-22 softball season, at least that we know of. We track only “traditional” or “standard” statistics, not the new, advanced metrics. Maybe somebody set a record for one of those metrics, but we’ll never know! Look up the definitions for BABIP, OPS+, WRAA, WPA, and WAR, and you’ll have a headache trying to decipher what they mean and how to calculate them.

Here’s a rundown of the “stats for dummies.” The numbers are for the regular seasons only and exclude tournaments. Leaders are listed separately for the Lakes and Sun divisions with the Lakes’ leaders shown first.

Triples: Joe Commisto and John Robinson (both with 8) and Kelly Anderson and Dave Martin (both with 5), far below Bill Stanick’s 2016-17 record of 20

There you have it—no new records, but lots of stats that we dummies can understand!

Thanks again to our chief statistician Jim Entwistle and to all the scorekeepers who recorded the results of every at-bat. There would be no stats without them.