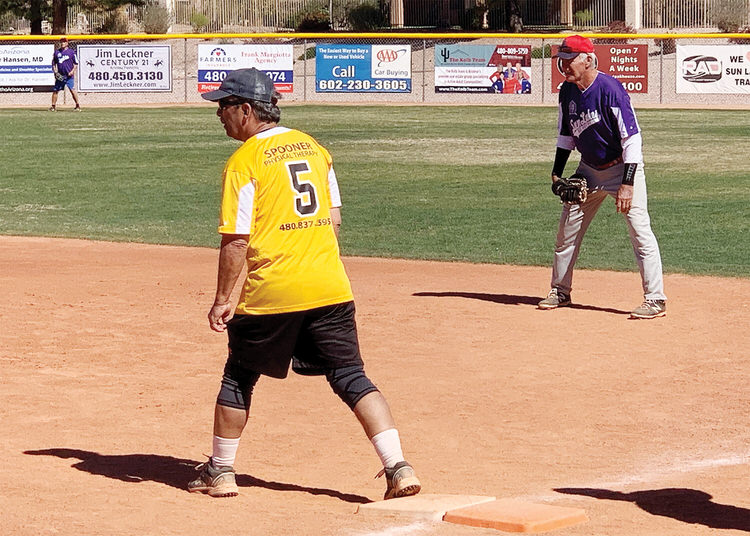 A photo from the Sun Division championship game: Dave Martin is on base as first basemen. Dave Waibel awaits the next pitch. (Photo courtesy of Captured Moments Pictures)

Both of our Winter League Divisions ended up with two teams tied for the league lead. In the Lakes Division, Manager Vern Rodgers’ Brenden Financial Planners and Manager Tom Erpelding’s Core Photographers both finished with 11-7 records, one game ahead of Manager Gary Hillabolt’s Young Team Realtors. The Photographers started the season by losing six of their first eight games, but stormed back to win nine of their last ten to tie for the lead. Manager Bill McCoy’s A-1 Golfers couldn’t quite get things together, finishing with a woeful 4-14 mark.

In the closely-contested Sun Division, Manager Mike Gloyd’s Redeemed Team Realtors and Manager Dave Platt’s Spooner Physical Therapists both had 10-8 won-lost records, just two games ahead of Manager Randy Neumann’s Leckner Realty squad and Manager Bobby Farmer’s Wolfe & Associates Accountants. The Redeemed Team and the Spooner PT crew entered the final day of the season with identical 9-7 records and played a doubleheader to determine the division championship. In the first game, Spooner PT eked out a 19-16 win to put the pressure on the Redeemed Team. “What pressure?” asked Manager Gloyd, as his club exploded for a one-sided 31-11 win to tie for the Division championship.

Lakes Division batting leaders after the Fall and Winter Sessions included seven players with averages of .700 or better, led by Vern Rodgers at .761. Other members of the 700 Club were Tom Lorgan (.754), Doug Warwick (.736), Frank Rouse (.735), Bill Jacobson (.727), and Terry Zeltinger (.717). Vern Rodgers and Doug Warwick both had six homers to lead the Division, one more than Bill Jacobson.

Our Spring Seasons are now well underway and will continue through mid-April. Check our website www.sunlakessoftball.com for up-to-date news.

Thanks to Dan Schneider, President of Aluma-Line, Inc., for renewing the company’s advertising banner at the Field of Dreams. Aluma-Line has supported our program since 2003. Links to Aluma-Line’s website and all our other advertising and team sponsors may be found on the Sponsors Page of our website. SOS: Support Our Sponsors!