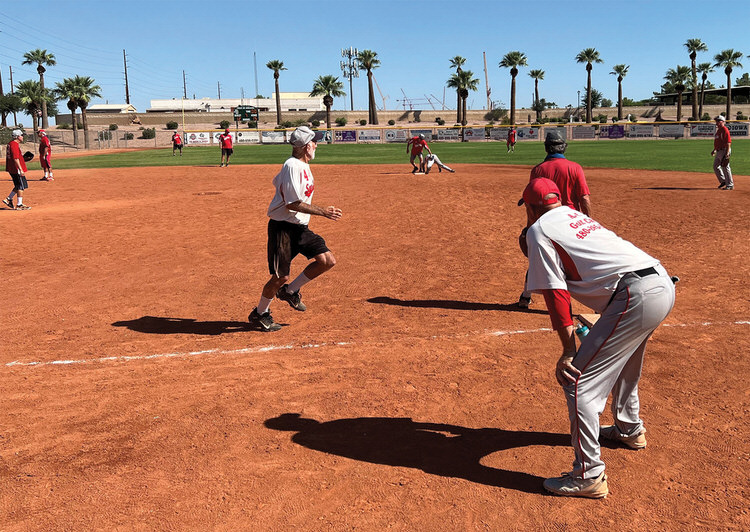 Larry Maggard sprints toward first base in a recent Summer League game. The Fall League is scheduled to start on Oct. 25. (Photo courtesy of Play Ball Photos)

We wrapped up our long summer season, which started in May, in mid-September. Our guys are now practicing for the upcoming fall season at Snedigar Park while the Field of Dreams is being overseeded. Opening Day for the fall season has tentatively been set for Oct. 25, dependent upon overseeding being completed by that date. We plan to have eight teams, four in each of the Sun and Lakes Divisions. Team rosters and game schedules will be posted on our website, www.sunlakessoftball.com, during the week of Oct. 16.

Our ladies’ team, the Sun Lakes Sluggers, who play in the Valley of the Sun League against teams throughout the Southeast Valley, will begin practicing for their season in late November. Keep an eye on the Ladies Page of our website for up-to-date information.

A well-attended Farewell Party was held at Nando’s Mexican Café for long-time member Larry Kaufmann and his wife Felicia. The Kaufmanns are relocating to California to be near their family. Larry played in our league for over 15 years. He also served as team manager for many seasons and was a valuable member of our traveling tournament teams. Larry was a four-time batting champion, with a career-best .838 in 2013, the second highest average in the history of our league. He also holds the all-time record for doubles, smashing 50 two-baggers in 2016. Additionally, he was noted for having a rifle arm, throwing out hundreds of runners trying to score over the years. He’ll be missed as a great ball player but, more so, as a great teammate. Enjoy SoCal, Larry and Felicia!