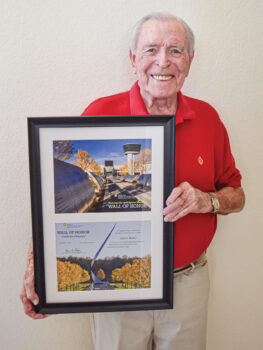 Good things happen to good people. Judy and Nuel Sanders were recently notified that Nuel has been selected to receive a special honor for his time in Service, and his passion for flight, and the numerous contributions he has made during his career in the Aerospace Industry. Nuel’s name will be inscribed on the Museum’s Wall of Honor, a sacred part of the Smithsonian National Air and Space Museum.

The National Air and Space Museum’s Wall of Honor is a permanent memorial at the Steven F. Udvar-Hazy Center in Chantilly, Va., recognizing those with a passion for flight. Names included on the Wall of Honor include such icons as the Wright brothers, Amelia Earhart, Neil Armstrong, John Glenn, and Jim Lovell.

Nuel’s recognition came about due to his lifelong contributions to the aviation, aircraft, and missile industry. Nuel joined the United States Navy as an enlisted man in the Kitty Cruise incentive program. This program allowed him to enlist one year prior to turning 18 and offered a three-year stint, with eligibility for discharge once he turned 21.

During his enlistment, Nuel went to the Naval Aviation School in Memphis, Tenn. After completion of the program, he was assigned to be part of a patrol squadron specializing in radio, radar, and sonar equipment. Given his talents and expertise in sophisticated electronics, he was soon transferred to a Patrol Squadron based out of Barbers Point in Hawaii, where he was part of a nine-man crew that flew the P2V. This was a twin-engine plane that flew a variety of missions in the Korean War. His work supported ground troops and, more importantly, was part of strategic target missions in support of the troops.

After discharge from the Navy, Nuel accepted an offer of employment with North American Aviation. This is where his true love for avionics flourished. He trained on the F86 product line, and that led to an overseas assignment where he became an instructor for foreign airmen from Germany, France, and Italy. Needless to say, the training included many interpreters.

Nuel retired from North American Aviation after 35 years of service doing what he enjoys most in a professional career, his passion for avionics and flight.

Shortly after, Nuel and his wife chose to make Sun Lakes their home in 1996 where they enjoy so many of the amenities with family and friends.