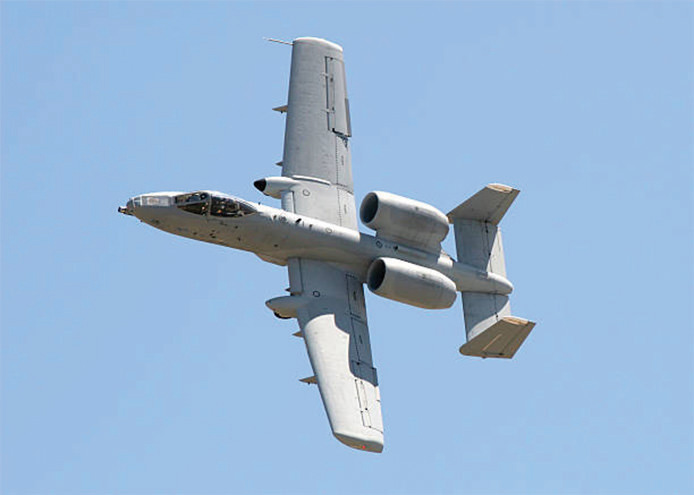 Phil Brewer will brief the Sun Lakes Aero Club’s gathering on Feb. 21 about his experiences controlling aircraft like this A-10 Warthog, bombing, and strafing ground targets at the Barry Goldwater Gunnery Range.

Sun Lakes Aero Club members and guests attending the group’s Feb. 21 gathering will hear all about the Barry Goldwater Gunnery Range. The event will begin with coffee and camaraderie at 6:30 p.m., followed by the presentation at 7 p.m. The location is the Sun Lakes Country Club Navajo Room, and the public is invited to attend. Phil Brewer, USAF bombing range coordinator, will describe what it’s like to control fighter aircraft at the range, located south of Gila Bend. The facility is a military restricted area and can be accessed by permission from Luke Air Force Base. The range serves the Air Force and Marine Corps as an armament and high-hazard testing area; a training area for aerial gunnery, rocketry and electronic warfare, tactical maneuvering, and air support; and a place to develop equipment and tactics.

The Aero Club has sponsored three field trips during the last 10 years to see F-16 and A-10 aircraft in action, bombing and strafing ground targets at the gunnery range. This will be an opportunity for members and visitors to see and hear how the aircraft are controlled in the range area.

Brewer is better known as the “Fighter Pilot in the Kitchen.” His nickname comes from the fact that he has written a number of cookbooks and other books about cooking. He has more than 5,400 hours flying A7D and A-10A aircraft while in the U.S. Air Force. Now in its 25th year, SLAC sponsors programs the third Monday of each month, November through April, at the Sun Lakes Country Club. The club’s next gathering on March 21, will feature a presentation by airshow and test pilot Bob Bishop, who built and flew a version of the world’s smallest jet aircraft, the BD5-J. More information on the club is available from Cannon Hill at 509-539-7857 or Gary Vacin at 480-298-7017.