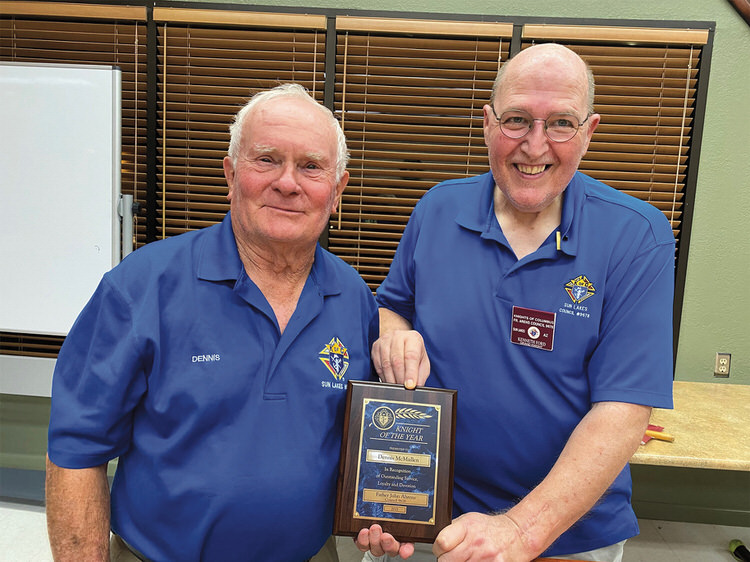 On Sept. 20, Council 9678 recognized Knight of the Year, Dennis McMullen, with an engraved plaque and a standing ovation! Dennis earned the award for his excellent work in setting up “hybrid” meetings (both in-person and electronic). During the pandemic, many members were reluctant to attend face-to-face meetings. This also was a means to reach our “snowbird” members. Over the past 14 months, several dozen Council members were able to participate “virtually” through GoToMeeting electronic technology, largely through the skills of Dennis McMullen! He also sends out notices of meetings, minutes resulting from the meetings, and the “Good of the Order” prayer list for ailing members and their family members.

In addition to his duties as IT (Information Technology) director for the Council, Dennis has arranged the distribution of flowers to residents of the Renaissance Assisted Living facility in Sun Lakes on Memorial Day and, more recently, arranged for giving out rosaries from the Council’s donated collection to ailing parishioners in area hospitals.

An active member of St. Steven’s Catholic Church in Sun Lakes, McMullen has served as Lecturer, Eucharistic Minister, Parish Council member, and president, and on numerous committees and task forces. He joined the Knights of Columbus in 2013, and in 2014 was initiated into the Fourth Degree—the highest membership category in the organization.

A native of Pennsylvania, Dennis was educated in Ohio, earning a bachelor’s degree in physics from John Carroll University in Cleveland, and an MBA from the University of Dayton.

He served honorably in the U.S. Army on active duty in 1961-63, and later in the active reserves, retiring in 1969 with the rank of Captain. After a 35-year career in information technology, Dennis moved to Sun Lakes in 1997. He and Barbara, his wife of 62 years, have three adult children and four grandchildren who live in Florida, Minnesota, Ohio, and Oregon. An avid golfer, Dennis also enjoys travel, community service, and spending summers in Northern Arizona. He can be contacted by email at [email protected]