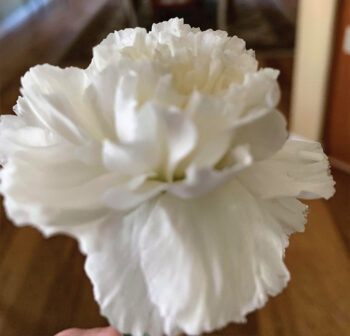 On Sunday, May 30, 12 Knights of Columbus members and support ladies met at the Renaissance to distribute nearly 300 flowers to the residents. The flowers had been ordered and paid for a year ago, but distribution was canceled due to the pandemic.

For more than 10 years, Council 9678 members have annually handed out carnations to the parish women on Mother’s Day. When the pandemic hit in 2020, this activity was postponed. What to do with nearly $250 worth of flowers that were non-refundable? Brother Dennis McMullen, IT director for the Council, suggested and later coordinated flower distribution to residents of the Renaissance facility in Sun Lakes. With Council approval, newly-appointed Financial Secretary John Caravella ordered the flowers for delivery on Memorial Day weekend. The rest, as they say, is history!

“I am glad we found a good place for the flowers—it is a shame to waste God’s bounty! The residents were truly surprised and very grateful!” brother McMullen said.

Dennis McMullen is a native of Pennsylvania who was educated in Ohio. He graduated with bachelor’s and master’s degrees in physics from John Carroll University located in Cleveland, Ohio, and an M.B.A. from the University of Dayton (Ohio). He served in the U.S. Army and in the active reserves, retiring with the rank of Captain. After a 35-year career in information technology, he moved to Sun Lakes in 1997 and joined the Knights of Columbus in 2013. In 2014 he attained the 4th Degree at a statewide Exemplification ceremony held in Tucson. He has been very active in the Council, most recently in facilitating the hybrid meetings which allowed members to participate in-person or by electronic technology. Dennis and his wife of 62 years, Barbara, have three children and four grandchildren who live in Arizona, Florida, and Ohio. Brother McMullen is also an active member of St. Steven’s Catholic Church in Sun Lakes, having served as Lecturer, Eucharistic Minister, Parish Council Chair, and on numerous committees. An avid golfer, Dennis enjoys travel, attending community service functions, and spending summers in northern Arizona.