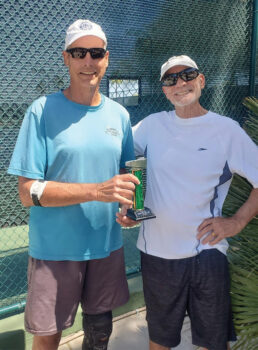 Ralph Howland was quick to say that all the fun singles matches going on during April were “not sanctioned or endorsed or anything by CTC. I just saw that Dean Sinerius had gotten some guys together for singles, and it looked like fun.” He agreed to be the organizer, and Ken Nelson did what they called the “fancy scoring.”

Howland sent out a flash to all the green players, men and women, asking if anyone was interested in a singles event. He ended up with five men and three women and a rousing good time. It was organized in a round robin style. Unfortunately, due to time constraints, they were unable to get all of the round robin matches played. But the top two players played in the “Trophy” match. Harvey Brooks won, with Hal Davis taking second place. Ralph made the trophy from a piece of the Palo Verde court that had broken off.

“We all had a great deal of fun,” said Ralph, “and I’m sure it will happen again.”