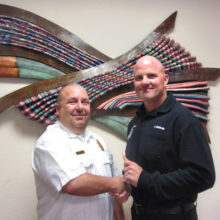 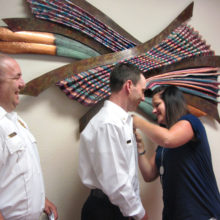 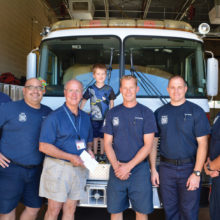 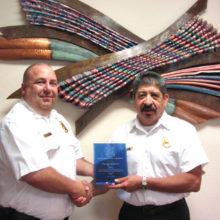 Sun Lakes Fire District Chief Troy Maloney (left) congratulates retiring Deputy Chief Dan Guerra for his service to Sun Lakes. Guerra rose through the ranks including a period when he served as interim chief of the district, but served most of his time as a battalion chief and then deputy chief for the last six years. Before serving in Sun Lakes he served in the Tri-City Fire District in Arizona where he served his last nine years there as assistant chief and also served in the TCFD as acting chief for a period. (Photo by LouAnn Sedgwick; caption by Brian Curry). 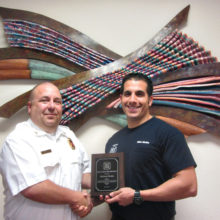 Sun Lakes Fire District Chief Troy Maloney (left) congratulates Captain Mike Molite on his 10th anniversary with SLFD. Molite holds an associate degree in fire science from Maricopa Community College and is an emergency medical technician. An acting engineer for seven years, he is an officer with his union SLERF (Sun Lakes emergency relief fund) and was promoted to captain in 2014. Prior to joining SLFD he worked in the emergency room at Chandler Regional Hospital. (Photo by LouAnn Sedgwick; caption by Brian Curry). 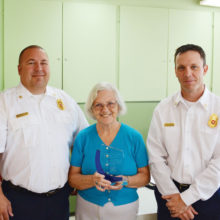 Sun Lakes Fire District Chief Troy Maloney (left) and Deputy Chief Rob Helie (right) presented a token of appreciation plaque to the Sun Lakes Women’s Association for their many years of support. Accepting the award for the association was President Collette McNally. Maloney thanked the women for their “unwavering generosity and philanthropy with the Fire District and the Sun Lakes community.” McNally commented that the SLWA was founded to help support the beginnings of what was then the Sun Lakes Fire Department when it was manned by all volunteers. (Photo and caption by Brian Curry), 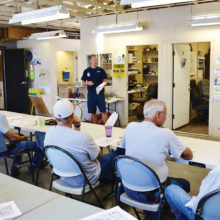 Engineer Dave DeGraff from the crew of Engine 231 of the Sun Lakes Fire District presents a training class to the employees of Pima Utility at their facility on Price Road. The class went over various heat emergencies; in particular, how to recognize them, how to deal with them and especially how to prevent them. (Photo and caption by Brian Curry).

Sun Lakes resident Jerry Rex and his four year old grandson Brendan Rex visited Station One of the Sun Lakes Fire District to thank the crew of engine 231 and ambulance 231 who came to Brendan’s aid recently. Brendan was visiting his grandparents when he went into respiratory distress and the SLFD crew responded and rendered emergency medical care to him, transporting him quickly to the hospital. Rex said the crew did a “fantastic job at a serious time” and wanted to offer his family’s thanks by offering the guys a gift card to Jersey Mike’s. Jerry is a long time Sun Lakes volunteer with Neighbors Who Care as well as SLFD’s own Community Assistance Program.