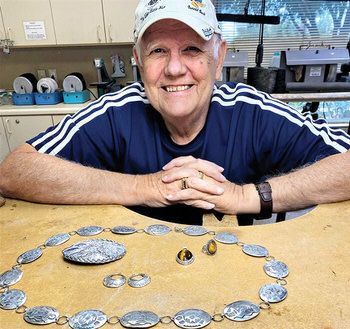 Well, he’s certainly been busy for the past nine years, but since Dick Eslick enjoys “giving back” to his community, we elected him chair of the Silver department, which automatically gave him a seat on our board of directors.

Wife Vicki and Dick moved from Oregon to Oakwood in 2004 after he retired as senior partner and owner of his architectural engineering firm. After graduating from Washington State University, he was architecture licensed in Washington, Oregon, and California for 37 years. As year-round residents of Sun Lakes for the past 19 years, Dick and Vicki were both co-captains for Units 29 and 29A. He ran and was elected vice president of the IronOaks Board of Directors where he served for three years. Heavily involved in the change to a new, professional HOA management team, he helped with the redesign of the Stone & Barrel restaurant and bar, the design and working drawings of the now pickleball complex, and the new parking lot extension.

Richard hails from a highly creative family! His mother is 102 and living at the Robson Reserve complex. She is an extraordinary watercolorist, and she won first place in a Phoenix art contest. His sister was a professional graphics designer whose designs were used by Coors Beer of Colorado, as well as Toyota advertisements.

Of course, he likes to golf and very actively plays tennis. As captain of the USTA men’s 3.5 senior teams, he competed in two national tennis playoffs. Later, as president of the IronOaks Tennis Club, he helped the board develop the first charity tennis event. Dick also served six years as chairman of the board for Neighbors Who Care, and he still helps out with driving and respite.

Another “feather in his cap” was when Dick was honored to become a member of the Crystal Awards in 2018.

We at the “Rock Club” extend a very special thanks to Richard Eslick who continues to find ways to “give back” to his community. We are very pleased to have him back with the Sun Lakes Rock, Gem & Silver Club and serving on the board.

As one of the largest and, we think, best clubs in Sun Lakes, why not come over to Cottonwood on the third Monday of the month from October through April at 10 a.m. and see what it’s all about. Or you can look us up on our website slrgs.com. 2023 will be a great year to get creative and make some new friends.