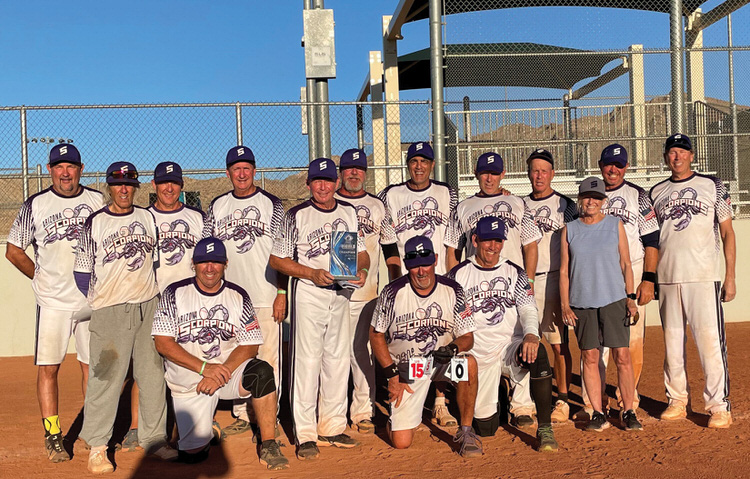 The AZ Scorpions 60/AAA team rolled to an 8-0 record in Las Vegas to capture the SS-USA World Championship Tournament crown. Competing in a massive 45-team bracket, the Scorpions combined outstanding pitching, relentless hitting, and a stifling defense to bring home the World title.

The Sun Lakes players were among the stars of the show in Las Vegas, placing four athletes on the All-Tournament team: Marty Hobby, Brad Wendt, Dan Melosi, and Mike Lebet joined Emery Hunt of Glendale on the mythical five-man squad. Shortstop Hobby was flawless in the field while hitting .786 with a homerun. He and Emery Hunt both hit .786, with Hunt powering two homers. Dan Melosi blasted two homers and batted .760 while gliding everywhere in the outfield with his easy, graceful gait and sure hands. Brad Wendt was a force at first base and at the plate. Slugging the ball at an almost unbelievable .833 clip, Brad delivered many clutch RBIs. Saving the best for last, Mike Lebet, the Tournament MVP, was sensational, going 22-for-24 and was on base in 90% of his 29 plate appearances. He played a tireless outfield, pinch-ran for players as needed, and gunned down a runner at the plate in a close contest versus the tough Nebraska team.

As dominating as these offensive performances suggest, one must also recognize the unbelievable pitching performance by Kenny Sheffield of Fountain Hills. Playing on a severely injured ankle, Sheffield was nearly unhittable, holding teams to under nine runs per game and twirling a shutout in the Championship game. “In 18 years of senior ball,” said Manager Dennis Dalton, “I’ve never seen such a dominating performance. Considering this was the Worlds, where teams bring their absolute best players, it was astounding to watch Kenny work. When you consider his injury, you just marvel at his ability and toughness.”

The Senior Softball-USA Association World Championships featured 662 teams across 28 age/skill divisions. It’s the senior softball marquee event of the year, the largest senior tournament in the world, and has drawn teams from all over the globe. The Scorpions played eight games against teams from six different states: Hawaii, Nebraska, Georgia, Texas, Maryland, and California, and they won’em all!

Posting a 60-16 W/L record over 12 tournaments, the Scorpions were first or second in 10 events, capping the year with the World Championship. With this win, however, comes an elevation to a higher skill level for 2023. The 60/Scorpions will compete at the Major level, the second highest ranked division. New player-manager Brad Wendt is optimistic about the season ahead. The Scorpions took the field in Fountain Hills Oct. 29-30 to kick off the new campaign.