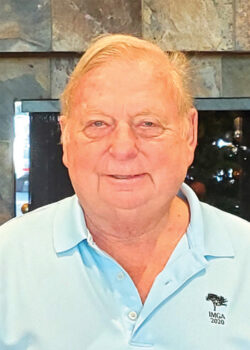 This month we launch a new format for recognizing members. The IMGA Board will highlight members who’ve made significant contributions to our golf association.

This month we’re highlighting someone who fits the criteria to a “Tee.” That member is Dan Jonker.

IMGA can only function with members who volunteer. We’re fortunate to have many who step up to the task. But few have for as long as Dan Jonker. Dan has had the task of being the treasurer on the IMGA Board for 10 years. A CPA by profession, he was a natural fit. But enough is enough, and Dan has decided to call it quits after this year.

Dan has offered up some of his golfing highlights, which, by his own account, were not that high, and are shown later. But first some highlights of Dan Jonker.

Dan was born in the Englewood area of Chicago, one of six children. His family, like everyone in that area, was poor, his father working two jobs to support the family. In his youth, he made money working at gas stations and as a laborer for a cement contractor. It helped him realize it made sense to get an education.

After graduating high school, Dan enrolled at DePaul University. It took him eight years to finish, going to school part time and working to support his family. He graduated from DePaul in 1968 and passed the CPA exam the following year.

Now living in New Buffalo, Mich., Dan built an accounting firm with three partners and five staff members. In 1994 Dan purchased a house in Palo Verde and moved there permanently in 1995. A few years later, his younger brother and his son took over the business, which, by this time, included financial advising services.

Dan became active in Rotary of Sun Lakes and in IMGA. He lays claim to have been the first “Phase 2” homeowner allowed to join IMGA. He would golf three days a week, with a handicap in the mid-teens. He’s proud of his three eagles at Ironwood on holes 1, 7, and 16. One league day, Dan thought he had a hole-in-one on hole 4, but the ball rested behind the flag, partially over the hole. He felt somewhat relieved, as he didn’t have to buy drinks that day. As balance against his better shots, Dan also tells of taking a 12 on hole 15 during the Ironwood Cup. Back surgery last year has now essentially sidelined him from golf.

Dan offered the best thing he’d ever done was marrying Lana, the love of his life. Married for 55 years, together they raised four children.

In Dan’s words, “The best part of being on the IMGA Board was meeting people … treasurer gets a little tedious … tournaments were a lot of work. All in all, I feel so blessed being here and upright, living in Sun Lakes.”

Dan, words can hardly express how much we appreciate your dedication to IMGA!