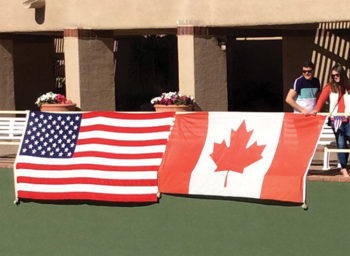 The flags of both countries hang on center court.

Cottonwood’s Can-Am Tennis social is a friendly competition between our favorite snowbirds from Canada and our local residents of Sun Lakes. It is always one of the most popular events, because everyone gets to dress up in their country’s colors, sing the American “Star Spangled Banner” or the Canadian anthem, “Oh, Canada.” A lot of us sing both.

The Fourth Annual Can-Am was held Jan. 26. Competitors included 65 American tennis enthusiasts and 41 Canadian loyals. The courts saw many lively matches of friendly rivalry. At the end of the day, the Americans won 60-45.

At noon, the competition halted for the Color Parade which started by court 4 and marched down onto Court 1. Canadians marched first, followed by the American contingent. Each country’s representatives were led by a mascot, Teton or Daisy. Canadians all gathered on the south side of court 1, the Americans on the north side. Cheers could be heard on the next block prior to the singing of the anthems.

Then players were treated to a delicious lunch of Canadian and American favorites with signature desserts from Canada and the USA. Helene Mein and Sylvia Page and their many helpers served up the homemade goodies. Doug Page and Garnet Jones kept the fans happy serving Caesars all day.

The courts were adorned with decorations from both countries, thanks to Toni Reider, Lil and Bill Bailey, and their teams of helpers. Thanks to Mary Ann Rice and Ernie Soczka for handling the registration table and Ernie, Jeff Donald, and Laks Jagnandan for manning the music all day.