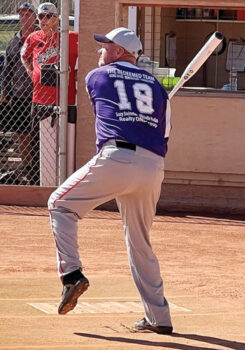 For those who just can’t get enough softball, we have a Summer League that started on May 3 and will run through Sept. 22. This league is less “formal” than our regular Fall, Winter, and Spring Sessions. We have three teams from Sun Lakes and one from Robson Ranch in the Summer League. Each team plays one doubleheader per week over the 21-week schedule. The Summer League Sun Lakes team managers are Kelly Anderson, Gary Hillabolt, and Mike Lebet. Randy Peterson manages the Robson Ranch squad. Volunteer umpires are Joe Byrne, Joe Commisto, Denny Davidson, Gary Hillabolt, Dave Platt, Randy Rothenbuehler, and Kim Whitney. Cyndy Hilby and Vern and Janet Rodgers are the scorekeepers and scoreboard operators. Thanks to all these volunteers for braving the heat so we can have a successful summer program.

A special shout-out goes to Jim Leckner, a longtime player, board member, and team sponsor, for all he did for our program over the past eight years. Jim and Connie recently moved back to South Dakota to be nearer to family. Thanks, Jim. You’ll be missed.

Also missing is the monthly “Softball Player Profile” article, so if you’re looking for it, you can stop! We’ll resume that series of articles in the fall.

We were saddened by the loss of two former longtime members of our association. Roger Bassetti and Bruce Watkins both recently passed away. Roger and Bruce were both members of several Sun Lakes World Tournament Championship teams, in addition to playing for many years in our regular league. Our thoughts and prayers go out to Roger’s wife Bonnie, Bruce’s wife Jane, and all their family and friends.

We also send out condolences to member Mark McKinnon who recently lost his brother DeShon Lobe to an unexpected heart attack. Our thoughts are with Mark and his family and friends during this difficult time.