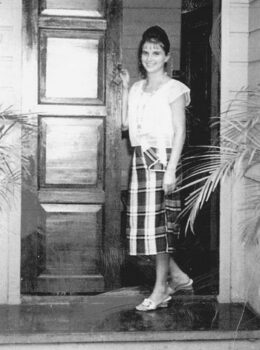 This year is the 60th anniversary of the Peace Corps. In 1962 at age 22, I was one of the first volunteers to be trained at San Jose State in California. As volunteers, we had choices of where we would like to serve. I chose the Philippines, because I wanted to be halfway around the world so that when I left after two years, I could travel west, visit several countries, and then say I had traveled around the world by the age of 24.

My job in the Peace Corps was to teach English and science in high school. I was assigned to the school district on the island of Siasi Sulu. Siasi is south of Mindanao located closer to North Borneo than Luzon.

When I arrived, I was met by the whole town, with one boy handing me a python snake as a welcome. There was no house for me, so I was put into the back part of the school’s Home Economics room. It was called that because it had two foot-operated sewing machines in it. There was no electricity. The water was hauled daily in five-gallon cans by me from the central well. There were no screens, and the stove was a clay pot in which I burned wood. The main diet was fish and rice, but once in a while, I could get a chicken. My grandmother had shown me how to ring a chicken’s neck, so I was accomplished.

The island had three groups of people living there: The Salmal were the sea people who lived in ventas (outrigger canoes) on the water. They believed in a Sea Devil. The Tausug were Muslims, and most of the teachers from the North were Christians. School started at 7 a.m., and there was a break from 10 a.m. to 2 p.m. for a rest from the heat or the monsoon, which happened daily. School ended at 4 p.m. I taught on the island as well as the Salmal people on their ventas. A school was built on a coral reef for them to attend.

Our three-month training at San Jose State was very intense, especially how to survive in a tropical climate. I boiled water every day or put iodine tablets in the water. I also took malaria pills every day.

The Peace Corps teachers were paid the same as the Filipino teachers, which was $40 a month. When I first arrived, everyone thought I was rich and wouldn’t bargain with me at the fish market. I finally got a teacher to bargain for me, which saved my life.

After leaving in 1964, I traveled west and reached my dream of visiting over 30 different countries. The stories for that trip, no one believed either. I was spit on in the marketplace in Teran, slept in wet sheets on a balcony in Cairo, stayed at the YMCA (yes, YMCA) in Beirut, stayed with a diplomat’s family in New Delhi, and then camped throughout Europe on $5 a day. This experience changed my life and made the only child of middle class parents in Missouri appreciate my life in the United States. I love America.

Sharon Gale has lived in Sun Lakes for 20 years. She is originally from Springfield, Mo. She graduated from the University of Missouri with a BS in education and an MS in educational psychology.

Sharon is an Army wife and moved 27 times. Sharon taught special education classes for 30 years. Moving around so often, she also taught with the Army Education Department while living four years in Germany.