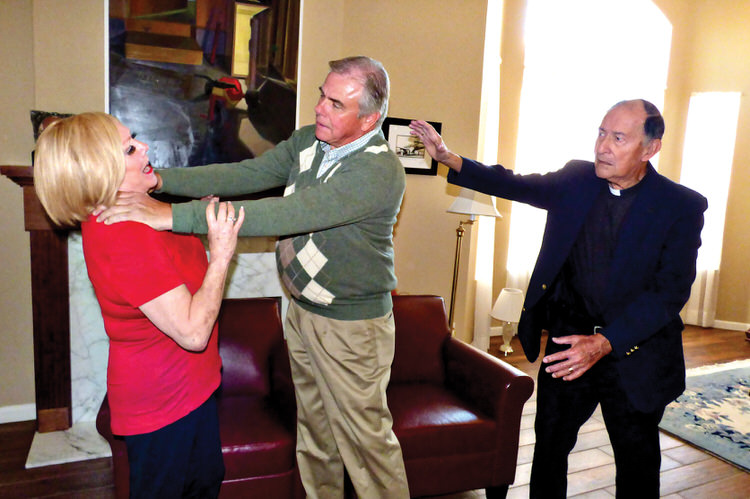 Pictured (left to right) are Kate Turner, Lorin Hicks, and Mario Carranza in rehearsal for Catch Me If You Can.

Rehearsals for Sun Lakes Community Theatre’s upcoming production, Catch Me If You Can, are physically demanding as well as content rich. The number of murders alone is staggering. There is a stabbing, a shooting, an attempted strangulation, and a poisoning—and with only four main characters, you can only imagine how taxing the rehearsals must be!

But that’s the fun of community theatre. Even as seniors, the cast is game for all the demands the script calls for in this psychological thriller. There are also plenty of humor-filled lines, especially for those of you who “get” 1965 references to people and places near New York City and the Catskills. And who remembers a long-ago car model called the Marlin? Rambler made it, and it plays an important role in the show.

Director Diana Nelinson is working hard to make the period piece as authentic as possible, with the help of prop mistress Maria Blanding and co-assistant directors Dennis and Susan Conzatti. Jim Brown will be managing backstage during performances, keeping everyone on cue and the lights and sound effects on time. As much work goes on backstage as on stage in a production such as this. Timing is everything when murder is involved!

Intrigued? Then mark your calendar for the day the tickets go on sale, April 6, at 9 a.m. Go to www.infoslct.com or call 480-382-6290. Showtimes are April 27 through May 1 at Cottonwood’s San Tan Ballroom. Wednesday through Saturday performances are at 7 p.m., and Sunday’s matinee is at 1 p.m. Don’t miss out on seeing this thrilling show!