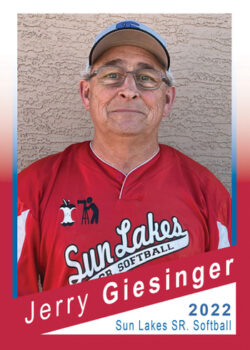 Born and raised in Rugby, N.D., the geographic center of North America, Gerard “Jerry” Giesinger attended Cardinal Muench Seminary for two years prior to transferring to Rugby High where he was a member of the Panthers football and wrestling teams, graduating in 1966. He then earned a bachelor’s degree in business administration at Minot State University in Minot, N.D.

Jerry’s first foray into the business world was as an insurance salesman, but after selling policies to all his friends and relatives, he decided to move on and became a counselor at the North Dakota Vocational Rehabilitation Center. After two years there, he was hired as an insurance adjuster by the General Adjustment Bureau and later became the Minot Branch Manager. Ten years later, he and his wife Patti decided to go into business for themselves and purchased the existing ServiceMaster Janitorial, Residential and Fire/Water Restoration franchises in Minot. They operated those businesses for 13 years before Jerry was offered a position at ServiceMaster Corporate at their Memphis, Tenn., headquarters. They sold their franchises and began an 18-year career in “corporate America.” Over the years, he held several director-level positions, including Director-National Accounts, Director-Disaster Restoration, and Director-National Training Center. He traveled extensively in his training position, conducting seminars for franchisees throughout the country. A career highlight was heading up a team that restored the Pentagon after the 9/11 attacks. Jerry retired from ServiceMaster in 2013 but continued as an independent contractor for another five years before “really retiring” in 2018.

Jerry and Patti have been married for over 51 years and have two sons (Brian and Brad), a daughter (Rebecca), and 10 grandchildren. The whole clan gets together every summer at their lakefront home in Alexandria, Minn. The whole family enjoys boating, skiing, wake surfing, and tubing around Lake Geneva.

The Giesingers are members of St. Steven’s Catholic Church, and Jerry is also a member of the Knights of Columbus. Additionally, he was a Rotarian, earning the prestigious Paul Harris Fellowship. And to top off his varied activities, Jerry served as a city alderman for several years back in Minot.

Classic car restoration is a major hobby of Jerry’s. In fact, he has a two-stall workshop that he added onto their Cottonwood home. His “babies” include a 1967 Firebird coupe, a 1967 Firebird convertible, and a 1956 T-Bird. He’s also a golfer and has tried the sport of pickleball.

But baseball and softball have been his main sports since Little League. He’s played a lot of softball, both in North Dakota and later in Memphis City leagues. This is his second year in our program. He says that after playing for a couple weeks, he felt like he’d known his fellow softballers for years. “The camaraderie is amazing,” he said, “and where else can you relive your dreams and be 12 years old again?!”