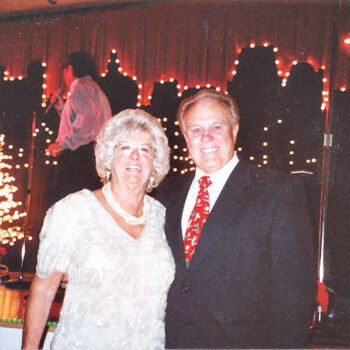 John and Ava Greenwood are celebrating their 70th wedding anniversary in April. They met in Cazadero, a small town in Northern California, in 1949. He worked in the redwoods logging. In 1950 he joined the Navy, then went overseas to Korea. In April of 1952 he returned home, and by that time, Ava had moved to Ukiah, Calif. She was working for the telephone company.

They then decided to get married and drove to Reno, Nev., to tie the knot. After his leave was up, his ship was sent back to Korea. Ava then moved to Long Beach, Calif., as his home port was going to be there. After his discharge, they stayed in Long Beach, as she continued to work for the phone company. John worked for the phone company also, and then went to work for Allstate Insurance Company as an adjuster, and later into management, retiring after 30 years.

Ava left the phone company after 11 years. She then stayed home to be a full-time mother to their two daughters JoAnn and Karen. They have four grandchildren and two great-grandchildren.