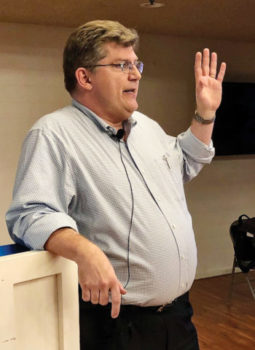 “Our goal is to broaden the airport’s uses by tapping into the market of business aviation.” That’s how Chandler Municipal Airport Manager Chris Andres summarized his plans for the airport during a presentation to the Sun Lakes Aero Club (SLAC) gathering Jan. 20 at the Sun Lakes Country Club.

“We want the airport to become the go-to stop for corporate executives needing places to land in the Valley. That is our ultimate goal,” he added.

“In the past, the airport has mainly served as a training facility for student pilots or a site for recreational flyers. Today, the city wants to diversify its portfolio by pursuing corporate flyers needing a runway to land their private jets. But several airports in the Valley have the same goal,” he said.

Andres is participating in the development of a Chandler City Council’s 18-month process to begin updating the airport’s master strategic plan. Andres has been airport administrator since March 2005. In his role, he oversees a staff of six and the day-to-day operations of the airport. Before joining Chandler, Andres worked for the City of Phoenix for almost 15 years in business development and planning roles for their Economics Development, Downtown Development, and Aviation departments.

Andres’ presentation was the third in a series of aviation-related talks sponsored by the Aero Club. Future speaker will be airshow and test pilot Bob Bishop who has built and flown a version of the world’s smallest jet aircraft, the BD5-J, on March 16. The April 20 speaker will be announced in the April Splash. The public is invited to attend all presentations.