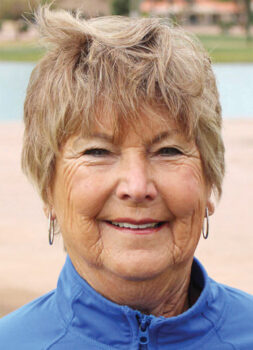 December was a wonderful month for golf … great weather, great friends—who could ask for more?

Sheila Axtman took first in our T’s and F’s game, while Mikki Rydell and Terry Gaube tied for second.

Ruby Meyer has chaired our Christmas Party for too many years to count. She represents the best of our group, always willing to help to make our events fun and rewarding, and this year’s party was no exception. The Scramble was won by the team of Paddy Newton, Joanne Rumpler, Maryann Sorensen, and Tracy Carlile. Second place included Mary Anne Lofquist, Trudy Houghton, Jan Martin, and Connie Gray. Following play, we gathered in the Saguaro Room for a lovely luncheon of pear salad and drink of the day, plus dessert choices. The firefighters came to gather toys collected by the membership for children’s Christmases. Although properly identified in the picture and article as CLGA officers, the headline of last month’s article credited the Cottonwood Lady Niners as donors. Golf teaches many life lessons including this one. Share the glory!

On Dec. 16, we played O-N-E-S in which Sandy Worden took the top prize, with Alice Barber, Terry Taylor, and Mary Anne Lofquist tied for second. Our Dec. 23 Fewest Putts contest was won by Paddy Newton. Mikki Rydell and Molly Westgate tied for second. I’m sure that these December winnings will put some of our members into the next tax bracket.

The post-golf gatherings for lunch and laughter are bringing 15 to 20 people together. There’s always room for more!