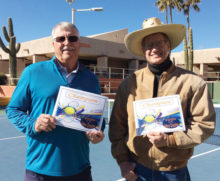 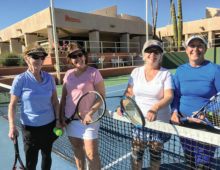 The longest match of the tournament (2 hours 37 minutes) and they could still smile. Cathy Moliter and Cindy McCarville (right) defeated Vonnie Ticknor and Mary Braton. 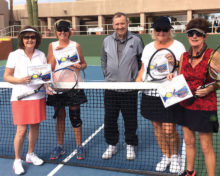 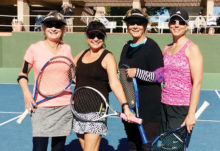 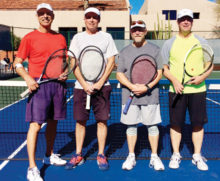 Champions of the CTC Gender Doubles

Cottonwood Tennis Club held its annual Gender Doubles Tournament Jan. 12-18. Competition included 43 teams, 86 players, and a total of 75 matches played. Because of the cold weather that week, matches didn’t begin until 10 a.m., and it was still chilly. Lots of coffee, tea, and morning snacks got players off to a good start.

Winning teams in the Women’s competition were as follows:

One women’s match in this tournament was the longest played in recent memory. It lasted 2 hours and 37 minutes. Kathy Molitar and Cindy McCarville defeated Vonnie Ticknor and Mary Braton. Molitar and McCarville went on to win third in the Red Women’s division.

Also this month, there was a “Tennis Social” with Palm Creek. A social is a one-day event usually held on a weekend between clubs from other communities like SunBird, Springfield, or Palm Creek. Cottonwood was victorious in this social. They won 18 matches while winning 220 games. Palm Creek won 12 matches with 169 games. Cottonwood will travel to Palm Creek next January.