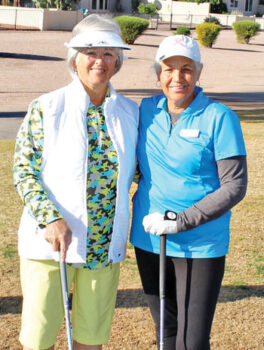 March was the month of winners! Chief among them was the partnership of Alice Barber and Diane French, who took the overall top prize in our two-week Partner’s Competition. Other flight winners included: Joyce Parker and Joanne Rumpler in first flight, Joanne Malakanich in flight two, and Gloria Combs and Virginia Diers in third flight.

We closed the month with a Criers’ Tournament able to throw out three bad holes. For many of the golfers, three bad holes weren’t enough. Those with the big smiles won their flights: Rachel Rainville in one, Terry Gaube in two, Nancy Gahn in three, and Liz Kirkpatrick in four.

I need to apologize to Nancy Gahn. In my feeble effort to be clever with reporting Service Awards in April, I failed to proofread the picture caption and left her name off. This was totally unintended, for Nancy is a great contributor to the club’s membership.