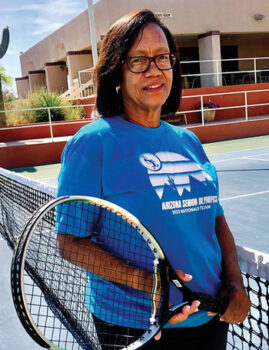 Ollie Johnson, one of Cottonwood Tennis Club’s teachers for the free Monday night tennis clinics, recently competed in the Senior Olympic Competition in Fort Lauderdale, Fla. She made the top five in several of the competitions and was awarded ribbons.

The criteria for participation was the applicant had to Medal in their respective states. Ollie was a Gold Medal winner from Arizona and qualified in tennis for singles, doubles, and mixed doubles. Participation was limited to two categories for tennis. In categories like basketball and baseball and other team sports, there was a single category. Categories were determined by age of the youngest player. Ollie played in the 70-74 category for Women’s Doubles and the 65-69 category in Mixed.

There were competitors from all 50 states and a few foreign countries. More than 11,000 athletes competed in 35 or more venues.

Some of Ollie’s favorite activities were the Passing of the Torch Ceremony, the Parade of Athletes, and the Freeze Dance, which broke a Guinness World Book Record for the most participants. The torch has been passed to Pittsburgh, Pa., hosts for the June 2023 competitions.

The Florida Senior Olympics was Ollie’s second event. She attended the Albuquerque games before the pandemic, and then there were no competitions held in the past two years. The Senior Olympics are presented by Humana. Gold, Silver, and Bronze Medals are awarded to the top three. Those placing 4-8 receive ribbons.

When asked if it was fun, Ollie said, “You get to meet new athletes from the various venues and meet up with old friends from prior Olympic Games. You also see friends who participated in the annual Huntsmen World Games held in St. George, Utah, in October of every year. It is a similar event with several venues.”

Ollie plans to attend as many of the Senior Olympic Games as possible. She also helped with the new summer Tennis Clinics, which took place in June.