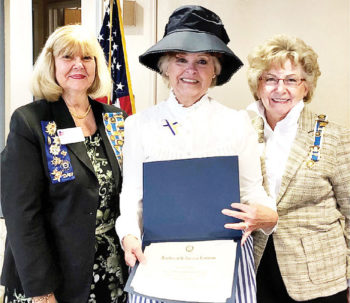 At its January general meeting, Gila Butte Daughters of the American Revolution (DAR) remembered the struggle for suffrage through the eyes of an Arizona woman who lived the endeavor. Vicki Bobo, acting as Frances Willard Munds, recounted Munds’ life as an activist and proponent of votes for women. Bobo is also Regent of Black Mountain Foothills DAR and is State DAR Chair for Junior American Citizens Committee. She is active in Children of the American Revolution.

Together with Arizona’s Pauline O’Neill, Frances Willard Munds ran a grassroots outreach to pressure the territorial legislature into giving women their right to vote. Despite setbacks, including gubernatorial vetoes, Munds persevered. In 1913, she represented Arizona at the International Suffrage Woman Alliance in Budapest, Hungary, and was on hand when, finally, the 19th Amendment passed Congress in 1919.

At the February general meeting, DAR’s Commemorative Events Committee presented a report on some of the women who led the national drive for voting rights for women, using photos and first-hand accounts. The 19th Amendment is one of DAR’s major national themes for 2019-20.

Many of the front-line suffragists were DAR members. Frances Willard, Alice Paul, Susan B. Anthony, Clara Barton, and Jane Addams were all Daughters, along with many others.

Gila Butte DAR meets in Sun Lakes and invites all eligible women to join DAR and continue to build on the work of our famous Daughters.

Every DAR member is over 18 and can prove bloodline descent from a patriot of the American Revolution. Many patriots are as yet unclaimed, and the chances of membership success are great. Expert genealogical assistance is available. For information, please call 706-255-4847 or go to the website gilabutte.arizonadar.org.