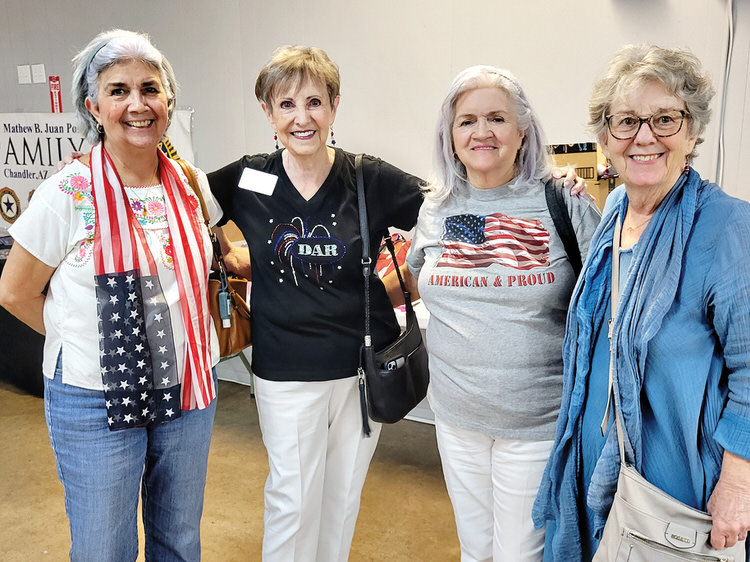 On April 2, at 1 p.m. the Daughters of the American Revolution, Gila Butte Chapter, held our first-ever flag burning ceremony at the Chandler American Legion Hall, Post 43. As soon as I arrived, Commander Lang had one caveat to tell me: Maricopa County would not allow a burning due to contamination of the atmosphere. In place of the burning, our DAR members participated in another appropriate manner to dispose of a flag: cutting it into sections. With plenty of scissors available, our members set out to follow the prescribed method of cutting apart our flags to the very last one. Once a flag is cut, it is no longer a flag, and we kept some of the star sections, thinking we could do something with the stars later.

The ceremony included folding the flag by a color guard, with the meaning relating to each fold read by the commander. The ceremony was quite formal, solemn, with a lot of saluting. We had a cash bar available. I think I was one of three people who decided that this ceremony deserved a salute with a cocktail!

In June, as a nation, we celebrate Flag Day, also called National Flag Day, in the United States, a day honoring the national flag. It is observed on June 14. The holiday commemorates the date in 1777 when the United States approved the design for its first national flag. You can go online for extensive information about the establishment of the flag and Flag Day. However, President Wilson in 1916 and President Coolidge in 1927 issued proclamations asking for June 14 to be observed as National Flag Day. But it wasn’t until Aug. 3, 1949, that Congress approved the national observance and President Harry Truman signed it into law.

I also found several quotes from the site: JesuitResource.org that I would like to cite here:

“We identify the flag with almost everything we hold dear on earth, peace, security, liberty, our family, our friends, our home … but when we look at our flag and behold it emblazoned with all our rights, we must remember that it is equally a symbol of our duties. Every glory that we associate with it is the result of duty done.” —Calvin Coolidge

By now, many of our neighbors are back in another state. Please remember your ancestry, your heritage, do research, and write it down. Those of us who remain in Arizona will still hold the Writer’s Group meeting on the first Monday of each month behind the Cottonwood Library, Room A-2, at 4 p.m. For more information about the DAR, please get in touch with Lesley Baran at [email protected]