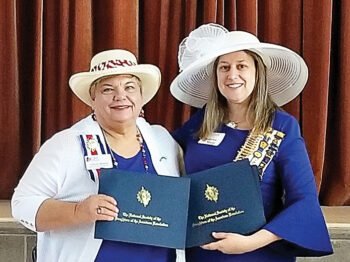 In recent articles I have written about the origins of the Daughters of the American Revolution (DAR) and about our country’s history. This month I would like to feature Lesley Baran of our Gila Butte chapter, who has been a member of the DAR for more than 30 years. However, Lesley’s husband Bill was the one to discover they both had a patriot while researching his own family genealogy. It came as a welcome surprise to Lesley, but as a busy young mother, she only had time to attend a few meetings to “check things out.” Once the family established a home in Georgia, Lesley applied for membership to the DAR. Much to her surprise, her acceptance letter was accompanied by her paternal great-grandmother Selma Nelson’s name and registry number. Lesley then questioned her dad about his mother’s affiliation in the DAR, to which he offhandedly replied, “Yes, she went to some meetings a lot.”

Lesley’s patriot William Cary first served in a local militia and then joined the Continental Army in his 40s. He survived the war and spent the remainder of his life in New Hampshire with his wife and their 15 children. Mr. Cary’s life story has been briefly recorded in a family history book which I shall quote here:

“He was Captain of Co. 1, Col. Fellows’ Regiment 1776, Captain of Co. 8, the same regiment which reinforced the army of General Gates at Saratoga at the time of the surrender of Burgoyne’s army, October 17, 1777.

“Deacon William Cary was an unusually large and strong man, and some remarkable stories are recorded of his great strength; it was said that he could throw barrels of cider into a cart as fast as a man could put them on end. In 1761, when a neighbor’s house was on fire, he took a tub of water, holding over a barrel, carried it across four post and rail fences, dashed it on the fire, and put it out. He was a Deacon of the Church in Lempster, and was influential and highly esteemed.”

Lesley spent the better part of her career in business-to-business sales and the last six years as owner of a retail pack and ship company in Gilbert. Near and dear to her heart, Lesley loves the organization, procedures, and rules followed in the DAR, right down to the wearing of white gloves when attending a formal event. For Lesley, the help given to our veterans, children, and service people is what gives meaning to the purpose of the DAR. She has held the position of Regent with two chapters, which is a two-year position, and she is a real pro at running a meeting smoothly and efficiently. When not busy with the Gila Butte chapter, Lesley supports her husband’s interest and activities in the SAR, Sons of the American Revolution.