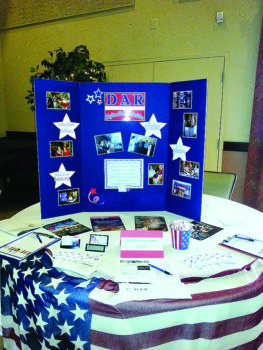 As a member of the Daughters of the American Revolution (DAR), one question I am frequently asked is, just what is a patriot? Good question, but first, let’s start at the beginning with our fight for independence. Once the founders of our country became more than fed up with the thumb of British rule on their necks, they found it necessary to make an official declaration of independence from England.

The potential for severe retaliation, war, was not wasted on these men. They knew it would come. And come to our shores it did. However, as young colonies, we did not have an army. In short, George Washington was appointed to create it, organize it, train it—a huge task in light of what the British would present as their army. However, the definition of a patriot is not only the people who fought as enlisted personnel in the new army, but also folks from local surrounding areas that picked up arms and fought alongside the men of the newly-formed army. Those people are called “militia,” and without them, who knows where we’d be today. Perhaps having tea at 4 p.m. each day. I digress.

There were other ways to qualify as a patriot; by actions of aid and support. For example, you paid a tax that went toward the purchase of arms and ammunition, food, uniforms, or other supplies that supported those in combat. Or my favorite example of a patriot is this next one. Let’s say the army is marching through the countryside. They are cold, hungry, and tired. They come upon your farm, and you allow them to bed down on nice, clean straw in your barn. You slaughter a few cattle, chickens and feed the men. You allow them to stay and regain their strength. By your actions, you have aided in the fight for independence, thus, making you a patriot. So, whether your ancestor fought with a rifle or a bayonet, performed acts of support, service or direct assistance, those actions were kept track of, recorded, and those folks are patriots.

The four women who founded the DAR in 1890 had a common bond. They had fathers or grandfathers who were patriots in the American Revolution. The spirit of those brave men and women is the reason why we perpetuate their memory through a variety of services and actions—so, their bravery is not forgotten. And, yes, there are proven women patriots. Proving your connection to a patriot may not be an easy task, as many of us can tell you. But when you find your patriot, discover his bravery, realize his sacrifice, well, I can tell you that you will be overwhelmed by his story. And you just may find a piece of your patriot’s bravery inside yourself. I highly recommend it and suggest you give it a try.