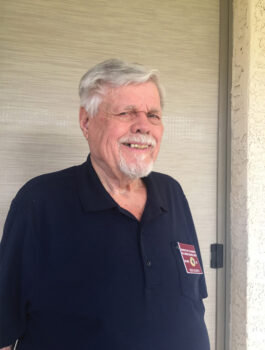 The Council welcomes a recent transfer from the great State of Colorado, Rob Calhoun. Rob is an active member of the Core Committee which reviews all Council activities and recommends improvements. A major task of the Committee is finding a fundraising activity to support the Council’s guiding principles of Unity, Charity, Fraternity, and Patriotism.

Rob was born and raised in the City of Owensboro in North-Central Kentucky. A product of Catholic schools, his “claim to fame” is that he was taught by nuns in grade school, high school, and college! “In fact,” he said, “some of the nuns taught me at all three levels of my education!” He majored in business administration at Brescia University (Kentucky) where he was involved in numerous extracurricular activities.

After college, he moved to Tucson, Ariz., where he was employed as director of restaurant sales for a national bakery company. Through connections made in that job, he purchased a fast food restaurant which gave him a taste of life as an entrepreneur. From then on, he has always been his own boss. In his business career, he has bought, developed, and sold 10 companies!

Rob joined the Knights of Columbus, Council 9678, in 2018, shortly after moving to Sun Lakes. “I found the Knights to be a great organization where like-minded Catholic men can enjoy fellowship while engaging in many different charitable, educational, and spiritual activities. One of the things that initially struck me about the Knights is that nearly all contributions and funds raised by our volunteers go to charity—the Knights keep nothing, except the small amount needed for covering operating costs! I highly recommend the Order to anyone seeking to become active in their church and community!” he said. To reinforce his words, Rob took part in the first Fourth Degree Exemplification (initiation) in the Diocese of Phoenix that was held totally by virtual technology!

Rob and his wife Margie live in the Oakwood community of Sun Lakes. They have seven children and five grandchildren who reside in Mesa, Ariz.; Albuquerque, N.M.; and Colorado Springs, Colo. Margie also serves on the Knights’ Core Committee where she and the other wives are working to involve more women in K of C activities. “All of us are better when the ladies take part,” Rob says. The Calhouns enjoy travel (especially to visit their grandchildren!) playing cards, and participating in volunteer activities in the community.