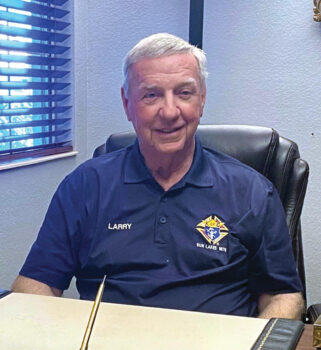 Larry Birlin is the longest-serving active leader in Council 9678. He joined the Knights of Columbus after moving to Sun Lakes (SL) in 1996, and for 25 years has served in numerous leadership positions, including the Council’s Grand Knight and Faithful Navigator of the Fourth Degree Assembly 2356, the patriotic arm of the organization. An early volunteer, he initiated several ongoing activities of the Council, including: Blood Drives, Clergy Appreciation Dinners, Parish Fish Fries, Wine & Cheese Tasting Events, and quarterly Corporate Sundays, where Council members and wives attend Mass as a group and gather afterward for breakfast. Most recently, he co-chaired a successful Spaghetti Dinner fundraiser that was attended by over 200 patrons! “Involvement of family members was a goal I actively pursued; The success of the dinner was partially due to the work by members of the Council’s Ladies Auxiliary and the St. Steven’s Ladies Guild,” he said.

A native of St. Louis, Mo., Brother Birlin graduated from Mercy High School where he excelled in baseball. He enlisted in the U.S. Navy in 1954, where he was trained for and served as a maintenance specialist for F-4 fighter aircraft. During his four years in the Navy, he was stationed in Hutchinson, Kan., and San Diego, Calif. After his honorable discharge from the Navy, he joined the RJR/Nabisco Corporation in 1959 as a route sales representative. After making five moves, he had worked his way up to area vice president, with responsibility for supervising 2,500 full-time and part-time employees in sales and marketing for 10 south central states. RJR/Nabisco was the major sponsor of the PGA Senior Tour. One of his job benefits was playing in many of these tournaments with key customers; the resulting trophies are proudly displayed in his home office.

Married for 60 years to Jonella (Jo) Birlin, Larry says, “She is the best thing in my life! And we are blessed with four terrific sons, their lovely wives, and four beautiful and smart granddaughters!” The Birlin sons live in Chandler, Austin and Dallas (Texas), and Germany. In addition to spoiling their grandchildren, Jo is active in community theater and fundraising for the SL Fire Department. When he retired and moved to Sun Lakes, Larry became active in golf, softball, and the Parish Advisory Council, Eucharistic Ministry, and St. Vincent De Paul charity.

When asked why he became a Knight, Larry said, “Like so many retirees, I wanted to get involved with organizations that helped others; it is a pleasure to work with my fellow Knights on activities that do just that. I also recommend the Ladies Auxiliary for wives of Knights; the ladies do outstanding work on our many charitable and service activities. I urge all Catholic gentlemen to consider joining the Knights of Columbus!”