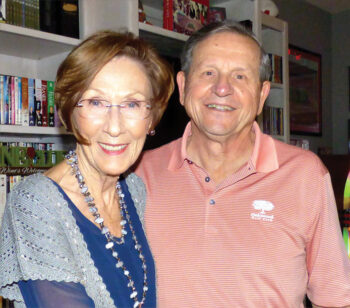 Let me introduce you to a couple who never sang or acted before moving to Sun Lakes.

Jim Janowski was born and raised in Moline, Ill. Judie, his wife, was raised on a farm in Kirkland, Ill. She learned to drive a tractor before she was old enough to drive a car.

Jim and Judie first met in 1970 when they both worked at Chicago & North Western Railway. A mutual work friend invited each of them separately to help him with his stock car. Jim knew of Judie from work, but they never spoke prior. A week later, the same friend asked Jim to meet him at a racetrack. When Jim arrived, he noticed his friend and his wife but also Judie. Eventually, they both realized that they had a lot in common. They married in 1971. Being the investigative reporter that I am, I asked if they had children. Jim answered, “not yet.”

Jim and Judie had backgrounds in car racing. They spent 10 years racing around the Midwest while maintaining full-time jobs at the railroad. Judie was the head of Jim’s pit crew.

After back-to-back 100-year winters in Illinois, they decided it was time to move to a warm, dry climate. Jim came to Arizona as a manufacturer’s rep in auto accessories. His sales territory was Arizona, Las Vegas, San Diego, and Hawaii. Judie stayed behind to sell their house. Six months later, she arrived. Judie was overqualified for any jobs that were offered, but eventually took a position as an office clerk. She advanced rapidly and eventually was World Wide Director of Materials for Microchip Technology, previously General Instrument, in Chandler.

They both retired in the late 1990s and moved to Sun Lakes in 2003. Even though Jim had never sung in his life, they both joined the Sun Lakes Chorale. The first concert Jim was nervous. He had never been before an audience. A few years later, the director of the Doo Wop shows approached Jim and said they were putting together a fundraiser for the fire department and asked if he would sing “Big Girls Don’t Cry” with three other guys while dressed as girls. He had considerable apprehension, but Judie talked him into it. After rehearsal one day, the director told Jim that she had another part for him to play as a towel dancer. That turned out to be a take-off of The Full Monty. All Jim wore under the towel was flesh-colored jockeys and a fig leaf! Needless to say, after a five-night run of that show, Jim was significantly less nervous in front of audiences.

After that first Doo Wop show, Jim joined the Sun Lakes Community Theatre (SLTC) and has now been in 16 plays. Judie has participated in 12 or more of those shows. She sang in a quartet in most of the Doo Wop shows and worked behind the scenes in the SLCT shows. She has been stage manager, house manager, props person, costumes, and Swiffer Queen.

Over the years, they have taken more than 40 cruises and many land trips. Most notable was the trip they took to Poland and Ukraine to visit the villages where Jim’s grandparents immigrated from.

They love living in Sun Lakes. Jim ended this interview by saying, “If you are bored in Sun Lakes, it is your own fault. We can’t wait for our next adventure.”