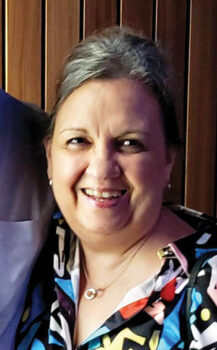 Many of us couldn’t imagine living in the same four-mile square area of town for all our growing-up years, but that’s what Robin Murray did. “Talk about a small-town girl,” laughed Robin. The town was Whittier, Calif. She attended Fullerton State University for her undergrad degree in public relations, and then went on to Western State University College of Law for her Juris Doctorate. That led her to become an expert in Labor and Associates Relations, a specialized career that had her representing management for businesses such as Kroeger, Home Depot, and Edward Jones in their negotiations with labor unions. In fact, she earned the nickname “The Ice Princess” from the Teamster Union’s top brass during the U.S.’s longest-running retail workers’ strike in history. She is one smart lady!

Her husband of 13 years, Lee, can attest to that. Lee was a pharmaceutical sales rep for Johnson & Johnson when they met. How did they meet? Robin’s co-workers convinced the divorced, single mother of two that she needed to do something besides work, work, work. So, Robin signed onto eharmony and began checking out the guys around her age. Her first thought when she saw Lee’s photo was, “Wow, he’s got hair!” No mean feat for guys in his, well, shall we say, “mature” time of life? Obviously, they hit it off and eventually eloped to Napa in 2009. In 2017 they purchased their home in Sun Lakes and began assimilating into the retired lifestyle when Robin retired in 2018.

Robin found her way to SLCT when she came to a rehearsal of The Old Time Radio Show, which Lee was narrating. She offered to help. That led to M.J. Clement asking her to help with lighting. Robin said she didn’t know a thing about lighting but she was willing to learn. A few shows later, Robin was running the lighting for Plaza Suite and has eight shows under her belt now. She’s most comfortable doing behind-the-scenes stuff rather than performing. However, she is an avid tap dancer who has performed in eight shows after taking lessons at several dance studios and the Chandler-Gilbert Community College for the past five years.

When asked what she enjoys the most about her involvement with SLCT, Robin says, “the people!” She loves the comradery, the mutual support, and the friendships that flourish within the membership. She serves on the board because she loves contributing and collaborating. Her vision for the theatre is to help us all adapt to the changing demographics of the members, audiences, and the community itself. Our members are aging, creating a need to hire more help for the physical demands associated with putting on a show. The community has younger people moving in, and SLCT needs to reach out to them. Our audiences need to see new faces on stage. Big visioning by a talented member of the board. SLCT is lucky to have “The Ice Princess” in its ranks.