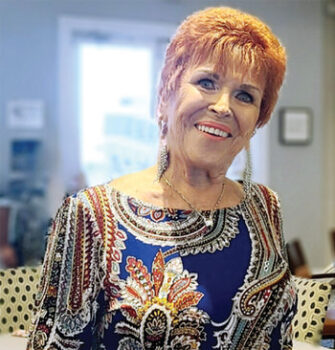 Barbie Bergerson and her warm smile

We’ve been introducing you to newer members of Sun Lakes Community Theatre (SLCT), but this month, we’re highlighting a veteran of SLCT. A member since 1996, Barbie Bergerson has been a mainstay in many productions, but you might not have seen her much. That’s because her favorite place is backstage, especially if she is the backstage manager. But make no mistake, she’s also had plenty of other jobs.

Barbie learned about SLCT after moving to Sun Lakes from Danville, Calif., in 1995. Her next-door neighbor invited her to get involved, even though she had never had any experience in theater. But she’d had plenty of experience volunteering. You could almost say that Barbie is a professional volunteer. Her family moved all over the country as she grew up, and after marrying her husband Dick in 1959, she kept up the changing of locales as he climbed the corporate ladder at Coca-Cola. As a result, Barbie had a knack for creating “clubs.” It started with joining “newcomers clubs” to which she creatively added (and led) card clubs, bowling clubs, movie clubs, etc., and eventually served as a volunteer board member for many of said clubs. She’s been a volunteer worker in her church’s office one day a week for 17 years. She also volunteered for both Pennington Gardens and The Perfect Place, a retirement home and adult day care center, respectively, for nearly 20 years each.

After joining SLCT, she jumped in with both feet and volunteered to do make-up for a show that, as she remembers, was presented at SunBird. She laughed, “I didn’t have a clue how to do make-up! But I learned fast!” Since then, she’s held numerous jobs, such as usher, producer, backstage manager, prop queen, and assistant director—many of these multiple times. Her favorite job is, she says, backstage manager, which she happens to be doing for the upcoming performance of Sex Please, We’re Sixty.

She has had her share of stage time as well, performing in plays Rumors, Because Her Heart Was Pure, Old-Fashioned Radio Hour, the Doo Wop shows, and Children’s Theatre’s Horton Hatches an Egg, and singing with the Chordaires, Sun Lakes Chorale, and as a member of her church’s choir.

Barbie loves being involved with SLCT and prides herself on being a good communicator, especially as the go-between between directors and their casts and crews. She’s not without some mischievousness, however. She admits to having filled some actor’s wine and whiskey glasses with “the real stuff” upon occasion, just for laughs. “Only once, and they drank it,” she joked. Barbie is known for her sense of humor and having a bright, sunny smile. Sun Lakes Community Theatre and its audiences are lucky she said yes to that neighbor all those years ago.