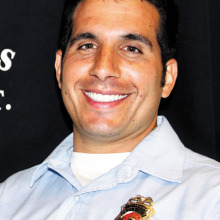 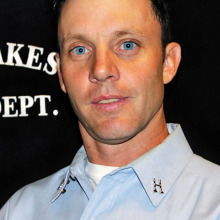 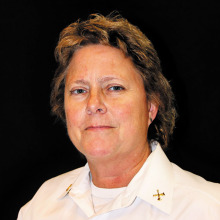 One of the very first chapters in the history of the Sun Lakes Fire Department will come to a close early this month when Battalion Chief Cheryl Van Horn, a 27-year veteran of the Department retires after a long and distinguished firematic and emergency medical care career.

Van Horn, one of the first professional paramedics in the Department, was hired in 1987 while the Department was in the process of changing over from a volunteer to a paid department. She very shortly trained to be a firefighter doing both jobs until she was promoted to Captain in 1992.

She served as a station Captain from 1992 to 2004 when she was promoted to Battalion Chief, a position she has held since then. Along the way, she has been responsible for or originated plans for the Community Assistance Program, Community Outreach and emergency medical services.

Chief Van Horn has also been involved in various grant requests as well as numerous recruitment processes for new firefighters and medical personnel and promotional testing within the Department. Van Horn said of her Sun Lakes career, “It was very rewarding working with wonderful people who do amazing things every day in the Sun Lakes community.”

Van Horn plans to spend her retirement with more quality time with her husband Dennis, her extended family and friends and devoting time to golf, hiking and dog agilities.

Taking over as Van Horn’s replacement and becoming Sun Lakes new Battalion Chief will be Robert Helie, an 11-year member hired as a firefighter/paramedic who has been a Captain since 2008.

Helie, who holds a degree in Fire Science Technology, is the lead fire cause investigator for the SLFD and a member of the Maricopa County Task Force. He is also a certified member of the International Association of Arson investigators.

Captain Helie has served as a Recruit Training Officer for new firefighters from SLFD as well as other East Valley Departments multiple times as well as being certified to train various firefighting and medical categories and has also worked with the Department’s Community Assistance Program.

He is married to his wife Shawn and has two girls, Johana and Vienna. Helie was also a volunteer firefighter in New York from 1994 to 2001. “I look forward to serving the Sun Lakes Fire District with professionalism, knowledge and innovation,” Helie said.

Being promoted to Captain to take over for Helie’s vacancy will be firefighter/EMT Michael Molite, a member of the SLFD since 2006 who also holds a degree in Fire Science Technology. Molite, who has served in a variety of positions within the department, has been an acting engineer since 2009 and an acting captain since 2012. “It has been a pleasure serving as a firefighter for the Sun Lakes Fire Department for the past eight years; I feel that this time has successfully prepared me to take on my new position as a captain in order to better serve the community of Sun Lakes and my fellow firefighters. I look forward to giving back to my organization and community at a higher capacity and I am very thankful for the opportunity to grow professionally within the fire and medical service.”

Molite is married to his wife Valerie and they have a daughter, Capri.

Chief of Department Paul Wilson commented on BC Van Horn’s retirement and the subsequent promotions, “We wish Battalion Chief Van Horn the best in her retirement after 27 years of service to the Sun Lakes community; and after comprehensive promotional testing processes, two promotions will occur as a result of her retirement.”