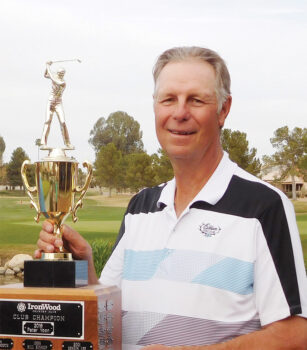 Sadly, Larry Horner, a good friend to many fellow golfers at Ironwood, passed away recently. Larry played regularly in IMGA events and in the Odd Couple League and won the IMGA Club Championship three times!

Joe D’Amore said that the last tip Larry gave him was to always aim my putts at the high side of the hole. Joe stated, “Larry is now on the highest side, offering tips there—but only if asked.”

He will be missed.

Harry Johnson got a hole-in-one on #17 in the Team Stableford Tournament and was awarded $100 from IMGA. Congratulations, Harry!

Our many thanks to Bruce McCorkle, who for almost five years was the IMGA Publicity Chairperson. He plans to stay involved in the task of updating the IMGA members album and trophy activity.

Dan reported that we did better than break even for the prior year, ending up with almost $600 upside for 2020. He reported the online renewals are working very well!

Bill organized a Christmas lunch in December for the Ironwood grounds crew on behalf of IMGA, and the crew was very appreciative. Another positive for the course, the tree trimming project should be complete in January.

Dick reported that we now have 233 regular members! Further to Dan’s point above, 222 members used the online registration/renewal.

Thanks to Rich for continuing to promptly award chits to the winners, and thanks to the two volunteers who stepped forward to help him!

Dan Smith says the planning for the Ironwood Cup is well underway. This year, the three-week tournament will combine AM and PM groups into a single tournament. This is going to be a big tournament for IMGA. Additionally, the IMGA Club Championship will be held on March 2, 9, and 16.

He continues to update the website as needed or requested. Wayne is going to explore the possibility of updating the handicap list from the AGA website to ours.

Ross continues to do an exemplary job of keeping us together and informed. Thanks, Ross!