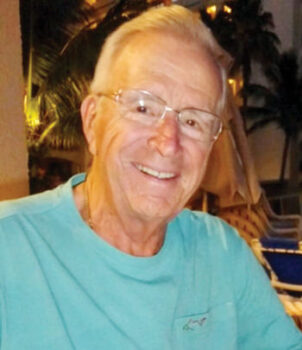 Bill was born in Bloomington-Normal, Ill., the oldest of three children. His childhood was full of school, Little League, Boy Scouts, and caddying at a local golf course. After high school, he went to work for State Farm in the Photostat Department—a time before copy machines.

Drafted into the Army during the Korean War, Bill was stationed in Germany, serving in the Atomic Artillery Battalion, allowing him to tour Europe during leaves. After his service, he attended Illinois State University, earning a teaching degree. After graduation, he worked for the Illinois Agricultural Association in the Investment Department—now married, with his first son.

In 1964 Bill moved his family to Southern California for better employment. He was hired by Home Savings of America (HSA) and worked there until retirement in 1995. His second son was born in 1968.

Bill started in the Loan Department. In the mid-1970s, company management sought a program for employees to develop a sense of pride and friendship through recreational activities. Bill was appointed to develop the program, running it for 20 years and becoming VP of Employee Services. Initially, he developed bowling leagues and softball teams, then expanded into tickets for sporting events and concerts at the Hollywood Bowl. As a large, 1200-employee company, Bill was able to book private parties at Knotts Berry Farm, the Spruce Goose, the Queen Mary, the San Diego Zoo, and Disneyland (Bill was made an Honorary Citizen of Disneyland in 1995).

The program expanded to include weekend golf tournaments and tours of wineries. Bill planned an annual picnic and holiday dinner dance for employees and their families. When HSA moved to Irwindale, Calif., his responsibilities included managing the new cafeterias and employee store. In 1984, a great personal experience was coordinating the efforts of two torch-runners for the Olympics in Los Angeles. Bill stated that his 32 years at HSA were great—a job making people happy.

During all this, Bill was raising two boys, coaching Little League, and participating in Indian Guides. He also met his future wife Cathy. They married in 1979, and by the time he retired, he had become a grandfather of three.

Near the end of his career at HAS, he and Cathy visited Sun Lakes and decided to build a home in Ironwood. Bill joined the Rock & Gem Club, making jewelry and glass pieces. He also joined IMGA that first year. He served as president of IMGA in 2007-08 and has remained active on the board through 2021. Never considering himself a great golfer, he has scored three holes-in-one. The first was the most exciting, as his grandson was his golf partner. He and Cathy have been active members in the Ironwood Couples League since 1995.

Bill and Cathy look forward to their annual trip to Cancun and visiting their family, which now numbers four grandchildren and twin great-grandchildren. As Bill says, “Life has been good.”

Thanks, Bill, for your support of IMGA!