Jim Bargioni, 84 years of age, was a resident of Sun Lakes and Sedona. He passed away April 5, 2020, in Sedona, from congestive heart failure.

Jim was born in San Francisco, Calif., to Fred and Caroline Bargioni and was raised in a loving home, along with his sister Marie.

Jim developed an outstanding reputation in his profession as a stationary engineer, eventually rising to the level of chief stationary engineer at several high-rise buildings in San Francisco, including the Transamerica Pyramid and 101 California Street, a Hines Corporation.

Jim and his wife Sandi retired to Sun Lakes in 2000. He had a passion for Corvettes and owned 13 in his lifetime.

Jim is survived by his wife; his sons Rick (Mark) and Bob (Lynette); granddaughters Gina and Tara; and his sister Marie. Other survivors include brother-in-law Dennis (Sandy) and numerous nephews and nieces.

A Celebration of Life will be held at a later time. 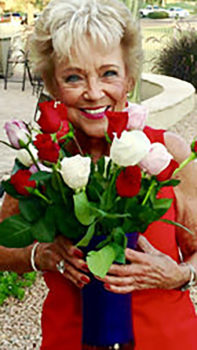 Mae Loretta Campion, age 92, of Buffalo, Minn., and Sun Lakes, Ariz., passed on May 8, 2020. Mae was preceded in death by her husband of 62 years, James P. Campion, and her infant son Loren John Campion. Mae is survived by her adoring children: Susan Lake (Cliff), James M. Campion, Linda Lorence (Jim), Janet Klassen (Brad), and Laurie Knese (Chuck). Mae enjoyed seeing her 29 grandchildren, 37 great-grandchildren, and three great-great-grandchildren. She will be missed every day by her companion and dance partner of the past eight years, Don Peterson.

Mae was an incredible woman in so many ways. Mae loved her family and was a great mom. Her warm, “How are you doing?” and always attentive conversation about your life made her a pleasure to be around. Mae was fun and wise! She always projected a cheerful and positive attitude. If you needed someone to talk with, she was there. If you wanted to play a game, she was ready. She enjoyed dancing throughout her life, even into her 90s. We were all blessed to have had someone in our lives like Mae!

Mae was a great friend and felt fortunate to have so many, many friends. She will be missed by all. Donations can be made to the organization of your choice. Celebration of Life service will be announced at a later date. 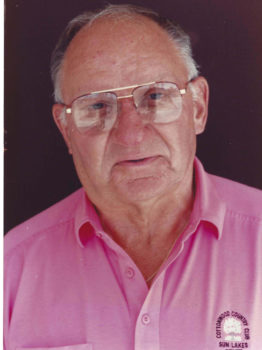 Bob was born in Cheyenne on July 12, 1930, the son of Catherine (Bluel) and Arthur Merna. After graduation from St. Mary’s High School in 1948, he joined the USMC and served three years in the Korean Conflict. On July 2, 1996, Bob married Patricia (Ryan) Nicholas, who survives. Bob was well known as a bar manager/owner and friend and loved a competitive game of golf.

He is survived by his wife Pat, son and daughter-in-law David and Marcia, granddaughters Elisha and Loretta, and seven great-grandchildren. He is preceded in death by his parents and son Donald. The family thanks Hospice of the Valley for their compassion when Bob needed it most. According to Bob’s wishes, his remains were donated to medical research, with final interment at St. Mary’s Cathedral Columbarium, Cheyenne, Wyo. 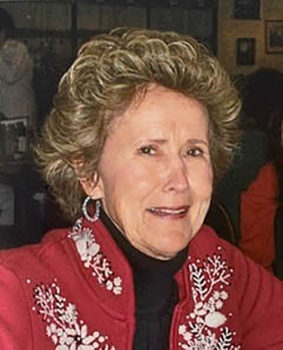 Dee Moser passed away peacefully surrounded by her loving family on April 13, 2020, in Sun Lakes, Ariz.

Dee was born on June 24, 1938, in Peoria, Ill., growing up there fishing with her family and waterskiing on the Illinois river. On June 15, 1958, she married Roy Moser in Creve Coeur, Ill. They spent time in Bloomington, Ill.; West Lafayette, Ind.; and Greeley, Colo., during Roy’s 37-year career with State Farm, moving to Greeley in 1964. Dee also worked many years at State Farm and for orthodontists Dr. Edgren and Dr. Kloberdanz. In 1999, they retired to Sun Lakes, Ariz., where they enjoyed golfing (Dee had 2 hole-in-ones), biking, and spoiling their two grandsons.

To escape the heat, summers were spent in Greeley with their son Randy (Chris) and visiting all their Greeley friends and enjoying golfing and socializing. She volunteered with the Assistance League, was a member of the local PEO group, and was a longtime Elks Lodge member. Roy and Dee also enjoyed dressing up for their Cotillion dances in Arizona for many years.

Dee was a wife, mother, grandmother, and friend to so many. If you met her once, you didn’t forget her cheerful spirit. She loved to talk! She will be greatly missed by all.

Dee was preceded in death by her parents Paul and Frieda Pesch. She is survived by her husband Roy Moser; children Randy (Chris) Moser of Greeley, Colo.; and Julie (Glen) Cooley of Chandler; grandsons Braden Cooley of Phoenix and Austen Cooley of Tucson; and her favorite grand-dog Riley Cooley of Chandler, along with numerous nieces and nephews.

In lieu of flowers, donations can be made to www.alz.org or www.parkinson.org. Cremation is being accorded. No services are planned. 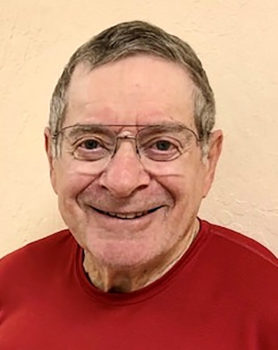 Ed Rockland, 76, passed away on May 9, 2020, as the result of a bicycling accident. Ed was born in the Bronx, New York, on July 27, 1943, to Benjamin Rockland and Julia Kaletsky Rockland. He was a proud graduate of Bronx High School of Science where he was captain of the basketball team. He went on to receive his bachelor’s degree from The City College of New York and his master’s from the University of Massachusetts at Amherst. His first job was teaching cane travel to the blind in New York City. After marrying Carole (Gilbert) Rockland in 1967, he began his teaching career in Prince George’s County, Maryland. In 1969 he moved to Pennsylvania where he would teach in the Derry Township School District (Hershey) for nearly 30 years. The Rocklands moved to Sun Lakes, Arizona in 2011.

Ed had great passion for teaching and continued to follow his students after his retirement, celebrating their many accomplishments. He loved cycling, and had cycled in 49 states and 17 foreign countries. He also enjoyed tennis, reading, writing, movies, telling stories, ice cream, and the New York Yankees. He was an active participant in New Adventures in Learning in Sun Lakes, both as a student and teacher. His love of teaching inspired him to volunteer in classrooms, first in Derry Township and most recently at Frye Elementary in Chandler, AZ.

Ed is survived by his wife of 52 years, Carole, and his much-loved sons David, of Chicago, IL, and Scott, of Gilbert, AZ, and his amazing grandson, Jackson, of San Marcos, CA. 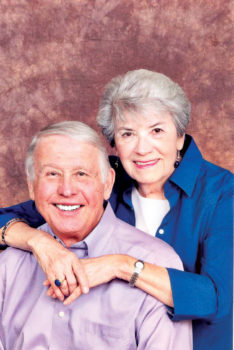 I was at her bedside when Ruth passed on April 27, 2020, and I felt that I had passed, too. Fifty-five fun years of a good marriage crossed through my mind instantly.

Ruth was a very caring people person with years of nursing experience followed by a master’s degree and teaching at McComb Community College in Michigan for 20 years. We traveled the world together and enjoyed the cultural experience and contact with many people in many different countries.

Originally from Canada and one of 11 children, Ruth was born on Jan. 30, 1936, of French Canadian and Irish parents in Tecumseh, a small town near Windsor, Ontario, Canada. Windsor is on the Detroit River, across from Detroit, Mich.

Mass and social celebration will take place when the current environment improves. 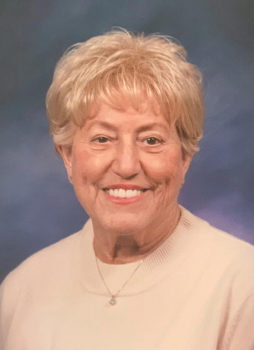 Nadine Walch was called home by her Lord and Savior Jesus Christ on April 16, 2020.

Nadine was born in Baraboo, Wis., to the late Ernest and Marie DuBois. During her senior year at Baraboo High, she served her community as a candy striper in the local hospital. After graduation, she worked at the Baraboo National Bank.

Nadine married Robert Walch on March 3, 1951. Bob’s career took them to Crystal Lake, Ill.; Toledo; and Newark, Ohio. In 1954, they moved to Green Bay, Wis., which became their home and where they raised their family. Nadine worked many years as an administrative assistant for Proctor and Gamble in Green Bay.

During summers, while sons Jeff and Randy were growing up, the family spent many weekends in Northern Wisconsin fishing. Annual vacations took them to many of our national parks; Washington, D.C.; and the Montreal World’s Fair.

The empty nesters years involved bridge and golf. After Bob’s retirement, they became snowbirds and spent winters at their Arizona home in the Chandler area.

Nadine was a lifelong member of the Lutheran Church, belonging to Faith Lutheran congregation in Green Bay where she taught Sunday School and served the Lutheran Women’s Missionary League Society. In Arizona, they were members of Risen Savior Lutheran Church.

She is survived by her husband Bob; sons Jeffrey (Mary Jo) of Green Bay, Wis.; and Randy (Carol) of Portland, Ore.; grandchildren Kelly Krueger (Ryan) of Suamico, Wis; Ryan Walch of Seattle, Wash.; and Alyssa Walch of Seattle, Wash; great-granddaughter Brynn Krueger; and sister Dyrellean Cain of Cedarburg, Wis. She was preceded in death by her parents and her brother Roger DuBois.

Interment will be in Woodlawn Cemetery. Services to be announced.

Constance (Connie) Odquist Wilkinson passed away Easter Sunday following a courageous three-year battle with cancer. True to her indomitable character, during her battle, she never complained about the sometimes-painful treatments or lost her sense of humor. She fought the way she lived—with calm, poise, positivity, and dignity.

Connie lived a full and adventurous life. She was born in 1933 to Victor Maurice Odquist and Viola Seelman. She attended the Masters School in Dobbs Ferry, N.Y., and Goucher College in Maryland. She married Robert (Bob) Wilkinson in 1962 and not long after, moved to Paris where her four children enjoyed their formative years. She took language, cooking, and wine tasting classes and fully immersed herself into her local community. She later moved to Tokyo where she studied Japanese and taught English at a Japanese high school. Another adventure took her to Hong Kong where she co-owned a “Junk” and spent many hours exploring the islands in the South China Sea. Back in the United States, she settled in the Pacific Northwest and later spent her winters south of Phoenix, Ariz. She loved sailing in Maine and took the time to sail a boat down the East Coast’s Inland Waterway, to the West Coast of Florida. Just prior to her passing, Connie and Bob moved to the Williamsburg Landing, in Williamsburg, Va.

Connie was outgoing and welcoming and always involved in her community. She made friends easily, pursued languages, reading, travel, pickleball, tap dancing, gardening, knitting, and entertaining. She raised her four children to be independent and critical-thinking adults.

She is survived by her husband Bob; her four children Jens, Bruce, Wendy, and Kari; and eight grandchildren.