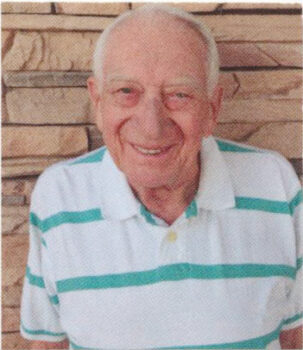 Bill was a veteran who proudly served his country in the Korean War. After the service, he was a stockbroker and served on both the LA Stock Exchange and the Chicago Board of Exchange.

He is survived by his wife of 58 years, Gloria Finerman.

He will be missed by all who knew him. 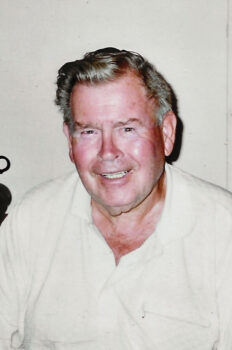 David F. Jewett, Jr., passed away peacefully after a short illness on Aug. 15, 2020, in Chandler, Ariz., at the home of his middle daughter, surrounded by family. Born on Aug. 31, 1923, in Newburgh, N.Y., David was the oldest of two sons to David F. Jewett, Sr., and Dorothy McKenna Jewett. David graduated from New Paltz High School in 1941, with dreams of attending Clarkson University to study engineering to design automobiles. WWII changed everyone’s dreams, and he served his country, working on his family’s dairy farm helping to keep America fed. Dave became New Paltz’s milkman, delivering milk and cream to the front doors of homes in and around New Paltz. Throughout the years, Dave’s passion for pre-WWII automobiles led him to own several 1938 Buick Special sedans, and many “rag top” convertibles. He was a General Motors customer his entire life and could tell you the make, model, and year, just by looking at the headlights.

David married Mary Jane “Mac” McCall on June 25, 1952, in Milford, Mich. He is survived by daughters Jennifer A. Jewett-Kelly of Scottsdale, Ariz., and twins Cynthia L. Jewett (Lori Nordstrom) of Chandler, Ariz., and Heidi J. (Patricia E. Kelly) of Tillson, N.Y., and grandson Sean T. Kelly of Scottsdale, Ariz. In 1953, Dave and Mac expanded the milk business to include JD’s Dairy Bar, and built the building that is currently Village Pizza in New Paltz, N.Y. JD’s ice cream was legendary in the community, serving the best soft-serve ice cream, “Wing Ding” thick milkshakes, flying saucers, coffee, and hot dogs with sauerkraut and Gulden mustard to the highway crews in the morning, to the Moriello Pool swimmers in the afternoon, and to the little league baseball teams at night. JD’s served as a gathering place to hear a joke, a story, or solve the problems of the day. Dave had a smile for everyone, was a great listener, and kept everyone’s confidences.

Dave served his community as a life member of the New Paltz Fire Department, including being their chief in 1950. Prior to the New Paltz Rescue Squad formation, Dave drove the ambulance for the fire department. In the 1970s, he served as a town councilman and police commissioner. After moving to Sun Lakes, Ariz., in 1981, Dave joined the community’s volunteer fire department, served on various HOA committees, and was still an active member of the Architectural Committee at the time of his death. Dave was a member of the New Paltz VFW; the Paltz Club; St. Joseph’s Church in New Paltz, N.Y.; St. Steven’s Catholic Church in Sun Lakes, Ariz.; and the Valley of the Sun Buick Car Club.

Dave loved his home in the Arizona desert, but he was a New Paltz “maroon and white Huguenot” to the core. Throughout his long life, Dave served his community with an eye on making it better. Along with his brother Warren, Dave and his family joined with the Wallkill Valley Land Trust and Open Space Institute’s “Two Farms Project” to conserve the Jewett and Kholsa farms on Huguenot Street. The preservation of these two idyllic properties will allow future generations to enjoy their rural settings and views for years to come.

Dave was predeceased by his parents, brother Warren F. Jewett, wife Mary “Mac” Jewett, and cousins John “Jack” and William “Bill” McKenna. He leaves behind many great friends, including Bill and Nettie Dingler and Lou and Linda Martin of Sun Lakes, Ariz., and Joyce Mennit and Jeff Hershey of Boulder, Colo.

A memorial mass was held on Oct. 8, 2020, at 10 a.m. at St. Steven’s Church in Sun Lakes. In lieu of flowers, donations may be made to the NY State Firemen’s Home in Hudson, N.Y. ([email protected]) or the Wallkill Valley Land Trust, New Paltz, N.Y. 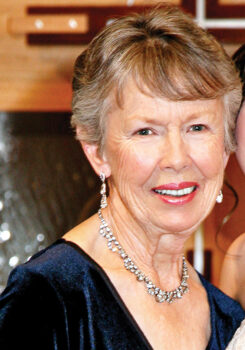 Betty Jane Hull Kent, age 92, of Sun Lakes, Ariz., passed away on Sept. 19, 2020. She was born to Harvey and Lela Hull (née Butz) in 1928, on the family farm in Noble County, Ind. She graduated from Cromwell High School, received her B.S. degree in Education from Ball State University, and her M.S. in counseling from Indiana University. Her career spanned 34 years as a home economics teacher at Lincoln Junior High and as a high school guidance counselor at Plymouth High School, both in Plymouth, Ind., then McClintock High School and Corona Del Sol High School, both in Tempe, Ariz.

Betty touched those who knew her with her gentle spirit, kind heart, and positivity. She was the epitome of grace and goodness. Her life path was one of learning and growing as a person. Adored by her students and respected by her colleagues, she combined a rewarding and successful career with raising her three children. Along with her meticulous homemaking, she found time for sewing projects and passed down that skill to her daughters. Her love of music was fostered by her favorite Aunt Ruby, and she became an accomplished pianist. She had many close friendships and stayed close with her siblings over the years. She was a natural beauty—her style was clean and classic, and her lipstick was always in place. When her children left home, she loved doting on her beloved Schnauzers (Sassy, April, and Shooter), traveling overseas, and spending summers in California and Utah.

Betty was a doer and a giver. Upon retirement, she learned to paint and loved sharing her beautiful scenic and floral watercolors. She learned Reiki, becoming a Reiki master, and shared her gift of healing with family and friends. As a cherished member of her Mastermind group, she spread peace and love to those in need. When the grandchildren came along, there were new traditions—enlisting their help wrapping homemade caramels, baking bran muffins, hosting Christmas with her special touches, happy birthday wishes with piano accompaniment, and many more.

Most of all, Betty cherished her family. Her husband Forry said meeting her was the luckiest day of his life. Her calm nature and lightheartedness balanced his feistiness, and their love was deep and lasting. Her children and grandchildren were her greatest pride and joy. She was to them a supermom/grandma, a grounding presence who instilled strong morals by her example and who constantly gave her support, her soft touch, endless energy, and love. She leaves them with many wonderful memories and will be missed dearly by them, her many friends, and extended family.

Per Betty’s request, the family will hold a private celebration to honor her and her legacy. For those wishing to make a donation in Betty’s name, please do so to the Arizona Humane Society at www.azhumane.org or the Arizona Animal Welfare League at www.aawl.org.

Donald Wayne Lutter, formerly of Oakwood and Renaissance, died at home on Sept. 17, 2020, surrounded by his family.

Mr. Lutter was born in Chicago on Sept. 13, 1926, to Alfred and Jane Munster Lutter, the second of four children. He grew up in Wilmette, Ill., where he graduated from New Trier High School. He went on to graduate from Northwestern University with a Bachelor of Science in Business.

In 1958, he married Antoinette Bolling, with whom he celebrated 63 years of marriage. They retired to Arizona in 1989.

Mr. Lutter enjoyed a prominent career as a Montgomery Ward executive. He retired as a Mobil Oil executive following Ward’s 1974 purchase by Mobil. He was a veteran of both World War II and the Korean Conflict.

He is survived by his bereft wife, Antoinette, his grieving children: Patricia Anne Butler (William Jr.), Tracy Elizabeth Ringel (Gregory), Catherine Carroll, Donald Jr., as well as his beloved grandson Kyle Ritters. He is also survived by his brother Richard and a host of extended family members who bless him for enriching their lives. 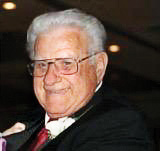 Len Edward Willis, Jr., 88, died peacefully in his Sun Lakes, Ariz., home on Sept. 27, 2020, surrounded by his family. A veteran of the Korean War, he was awarded an Ambassador of Peace medal for his service.

Len was born on Aug. 31, 1932, in San Jose, Calif., to Len and Madeline Willis. In 1950, he joined the armed forces and was assigned to the Naval Training Center in Coronado, Calif. He served as a radar operator, flying in a U.S. Navy Douglas AD Skyraider. During the Korean War, he was deployed in the 1st carrier strike task force stationed on board the USS Valley Forge CV 45. He was honorably discharged in 1953.

Len retired from State Farm Insurance in 1999, having worked 15 years in the auto claims department as an estimator. He and his wife Lois moved to Sun Lakes, Ariz., in 2000, where he loved to spend time with his family, watch his Arizona Diamondbacks, and give his beloved dog, Bear, too many treats.

He is survived by his wife Lois Willis, his children: Ed Willis, Cliff “Kip” Willis, Tina Woo, Kimberly Rebber-Hetu, Donna Schweitzer, and Amy Cook, as well as 20 grandchildren and 12 great-grandchildren. He is preceded in death by his parents Len Willis and Madeline Lewis, his sisters Betty Adams and Barbara O’Meara, and his oldest daughter Debby Minter.

Services were held on Saturday, Oct. 24, 2020, at Risen Savior Lutheran Church, beginning at 2 p.m., followed by a graveside service at Valley of the Sun. In lieu of flowers, donations can be made to the Infinity Hospice Foundation at www.infinityhospicecare.com/contact/locations/hospice-care-phoenix-az or Neighbors Who Care at neighborswhocare.com/donate.