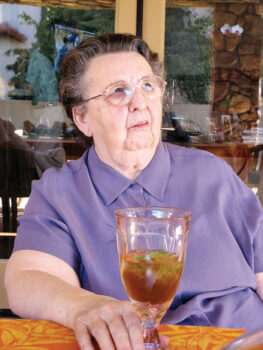 Dolores “Dorie” Kush, beloved wife, mother, grandmother, and sister, of Sun Lakes, Ariz., recently passed at the age of 93, surrounded by those she loved.

Dorie was preceded in death by her husband of 64 years, Stuart Kush, and two of her children: Jacqueline “Jackie” Kush and Wayne Kush at ages five and six months. She is survived by her children: Larry Kush of Scottsdale, Ariz., and Wendy Kush of Sun Lakes, Ariz., as well as her two grandchildren and five great-grandchildren.

Dorie was born in Johnstown, Pa., a graduate of Johnstown High School. After the war, Dorie and her husband Stuart headed West to catch that California dream and settled in the San Fernando Valley where she worked with Stuart as the master seamstress in their upholstery business for 35 years. In 1981 Dorie and Stuart followed their kids and grandkids to Arizona and became the first homeowners in Cottonwood, where they both lived until their deaths.

In Arizona, Dorie continued working alongside her beloved husband with a new upholstery shop in Chandler. She was an active member of the Cottonwood Sun Lakes community. She could continually be seen at the clubhouse visiting with friends and working on arts in the Ceramics Room. She loved to be with her family and cook for them. No one will forget her Christmas Eve perogies.

A Memorial Service is not planned. If you wish, a donation can be made to the Cystic Fibrosis Foundation in Dorie’s name.

Edward Vincent Lenihan, Jr., passed away on Sept. 2, 2021, in Littleton Colo., at the age of 92. Ed was born Sept. 14, 1928, at Mercy Hospital in Denver, Colo., to parents Edward Vincent Lenihan, Sr., and Madelyn Ruby Lenihan (Sheridan). Ed’s grandparents Michael Lenihan and Mary Quinn had immigrated to the U.S. from Cork County, Ireland, and Perth, Ontario, Canada, respectively, in the 1890s. After a stint in Iowa, the family moved once more and put down permanent roots in Denver in 1901. Ed’s father was born in Denver in 1904. His mother came from Worth, Mo.

Ed was joined by one sister, Beverly Jean Crook (Lenihan), and they grew up in Central Denver. The family attended Saint Francis De Sales Parish in Denver where Ed served as an altar boy. He attended some of his primary school years at Catholic school. Much free time was spent with the extended Lenihan, Brown, and Neal families and friends, with fishing and hunting trips to the Brown and Neal families’ ranches near Creed, Colo., on the Rio Grande River.

Ed’s father passed away unexpectedly in 1936 when Ed was only eight and Beverly just four. Ed’s mother eventually remarried Edward Woodward, and the family moved to the Garden Home neighborhood in West Denver. Ed and Beverly gained a new half-brother, John Ernest Woodward, in 1945. Ed attended all his remaining school years and graduated from Westwood High School in Westwood in 1947. Ed was his Senior Class President in 1947. An active athlete, Ed participated in basketball, football, and track and field throughout high school.

Ed was married in 1948 to Mary Ann Eberley, whom he met while ice skating. Ed and Mary remained married until her passing in 2015. Although they had no children of their own, they always enjoyed spending holidays, birthdays, and time throughout the years with all their nieces and nephews and their children.

Ed held a few jobs before he was drafted in 1952 during the Korean War, including delivering block ice to Denver homes’ ice boxes before the advent of refrigerators. Ed entered the U.S. Navy and was sent to Air Traffic Control school in Kansas. He then spent active duty at Naval Air Station in Denver as an Air Controlman 3rd Class until his Honorable Discharge in 1955, after the armistice in Korea.

After the war, Ed found employment and a career with the Burlington Northern and Santa Fe Railroad. He started as a yard clerk in the Denver rail yards and eventually became a manager in freight logistics and intermodal transportation. Ed retired from the BNSF in 1984 in Colorado.

Ed and Mary moved to Sun Lakes, Ariz., in 1986 but continued to spend summers in Colorado at Windsor Gardens. Both avid golfers, they spent much time with good friends, golfing everywhere they could, always enjoying outings with family and friends in Arizona, California, and Colorado. They also enjoyed travelling abroad with many good friends over the years through Ports of Call. Ed’s favorite visit was Ireland, where his family came from.

A classy, kind, and generous man, Uncle Ed is survived by five nieces: Linda Kaufman, Christie Fisher, Bobby Jo Wlodarek, Jill Maheu, and Lisa Peeples; and two nephews: Jim Eberley and Mike Woodward. He is preceded in death by his wife of 67 years, Mary Ann, his sister Beverly, brother John, and two nephews: Donald and Stanley Crook. He will be missed.

A clipping of this poem was found in Ed’s railroad memories.

They say yard clerking is just like a game

It has something to do with a train,

They give you some cards and point to the yards,

So you dash right out in the rain.

Your neck gets wet as you thumb through the deck;

That train is a mile up the slide.

With a hammer, a tack, and a sweaty back,

They will take it out of your hide.

So you walk and talk to the walkie-talk

That’s twenty more pounds on your back,

But when you get there, the track is bare,

There is nothing left but the hack.

So you start the grind of trying to find

All the cars the crew put away;

You swallow a lump, you look at the Hump,

Then you look the other way.

The rain comes down and soaks the ground

You start out puddle-jumping;

You look around, they can’t be found,

The hump-master keeps on humping. 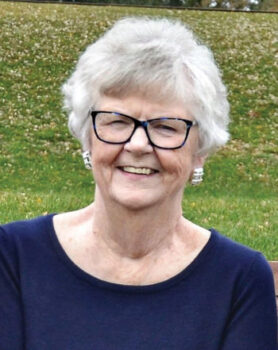 Francita Meloch, 86, passed away on Aug. 12. She was the wife of the late John Meloch. They were married for 56 years. She is survived by her daughter Francita Griffin (William), her granddaughters Reagan and Riley Peeper, her brother Eddie Harrington, and her sister Peggy Wagner (nee Harrington) as well as many nieces and nephews.

Born in Chicago (Canaryville), she moved to Homewood-Flossmoor and was the dispatcher for the Homewood-Flossmoor Fire Department until her retirement in 1995. She and John spent their retirement years in Sun Lakes, Ariz., where she was an active member of the Sun Lakes Posse. Cita enjoyed crocheting, needlepoint, and cooking. She always said, “Life is short; eat dessert first!” She was so loved for her generosity and kindness; she will be missed. 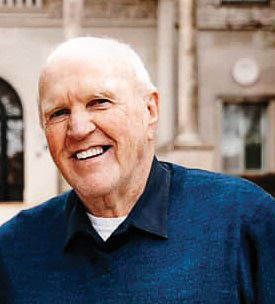 Hal enjoyed bowling and playing Bingo, golf, and cards. Some of his fondest memories included playing Bingo with his children and grandchildren and watching them play baseball and softball. He was affectionately called “Pops” by his many extended softball family members.

He is also survived by son Scot and grandsons Alexander, Malcolm, Nickolas, and Zachery Newton.

He was preceded in death by his parents, sister Jo Ann Gutowski, and daughter Tammi Suyak. 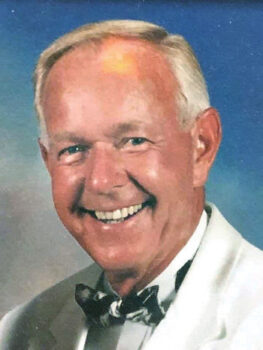 Max Marlin Spencer of Sun Lakes, Ariz., passed away on Aug. 25, 2021, at age 86. Max was born on Jan. 10, 1935, in Rocky Ford, Colo., and was the son of Beulah and Paul Spencer. He attended Oklahoma State University where he earned his doctorate degree in mechanical engineering in 1960. He was president of his fraternity, Pi Kappa Alpha, and was awarded a National Science Foundation award. While in school, he met and married his wife of over 64 years, Sherrill Lucille Spencer, who preceded him in death.

After college, he joined the Army, where he redesigned the bolt action of the M14 rifle and helped develop armor-piercing shells. He was discharged as a Captain in the Army in 1965. After the Army, Max went to work for the Boeing Company and retired after 30 years as a director of engineering in 1989. While at Boeing, he received numerous awards and was a designated Engineering Representative for the FAA. He received a NASA award for working on the space shuttle in 1974.

Max was very involved with his children and coached his sons in football, baseball, basketball, and soccer. He was Northwest Regional Indian Guide Chief from 1966 to 1968 and National Chief in 1967. He was a member of the Elk Yacht Club and the Hat Island Yacht Club and enjoyed many years of boating with his wife Sherry. He moved to Sun Lakes, Ariz., with Sherry in 1993, and they spent summers on the boat. He was an avid golfer and, in high school, was the club champion in Parkland, Wash. He continued to win many tournaments and honors as a member of Ironwood and Oakwood clubs and enjoyed playing regularly with friends and family.

Max and Sherry loved to travel, especially on cruises. They were able to travel around the world on more than a dozen cruises, including many with the family.

Max is survived by his daughter Paula Lomax; sons Jeff Spencer and Michael Spencer; grandchildren Crystal Connors, Michael Lomax, Stefany Mhyre, David Spencer, and Richard Spencer; and six great-grandchildren. Max was an amazing husband, father, grandfather, and great-grandfather. Max was a friend to all and was a kind and generous man who always had a positive outlook on life. 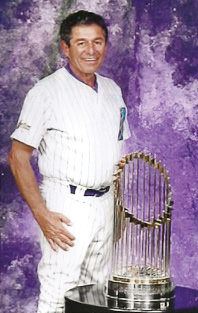 Dick was born Dec. 15, 1933, in Spokane, Wash. He attended Washington State College and served in the Navy during the Korean War. Dick’s career was spent in the food industry. He was national sales manager for Norbest Turkey Company and was a founding partner in Pacific Food Marketing.

Dick was a college basketball official and was involved with softball as a player and an umpire for over 45 years. He was a nationally-recognized softball umpire. He umpired eight national softball tournaments and served as the Umpire-in-Chief for the Portland Metro Softball Association for 15 years and was inducted into the PMSA Hall of Fame in 1995. It was through softball that Dick met Charlene. They married on Dec. 1, 1989, in Vancouver, Wash. They had 32 wonderful years together.

Dick and Charlene moved to Sun Lakes in 1998. He was a Golden Glover for the Arizona Diamondbacks in 2001. This was the year they won the World Series. One of the highlights of his life was being on the field, in his Diamondback uniform, for the seventh game of the World Series. He got a hole-in-one and shot his age before he had to give up the game of golf. While these are memorable events, Dick always said the best part of retirement was the time spent with family and the fun times he had with his wonderful Sun Lakes friends.

A Celebration of Life will be held later this fall. Donations in Dick’s memory can be made to Hospice of the Valley.