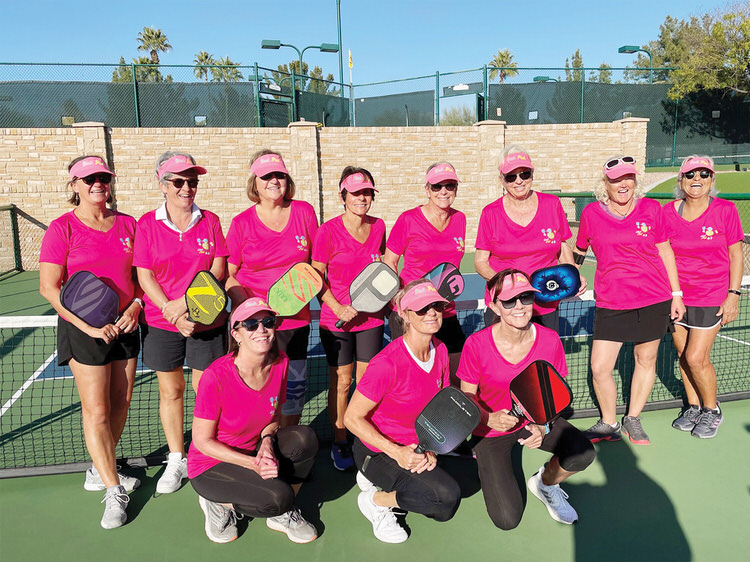 IronOaks pickleball players just completed the 2022 season with the Arizona Pickleball Players League (APPL). Five teams from our community competed in the East Valley Interclub League (EVIL), which is made up of players from clubs or communities 50-plus years in age, with skill levels ranging from 2.5 up to 4.0. The APPL League (19-plus) consisted of players ranging in levels from 3.0 to 4.5/5.0+ in men’s, women’s, and mixed divisions.

For 2022, an inaugural 2.5 women’s division was added, and four communities were able to put a women’s team together to compete. For IronOaks and Cottonwood to have enough players to form a team, we needed to combine players from both our communities. Most of these ladies had never played anything but recreational play, so this was a big step for them. The Dink Pink team was successful in their first season together, garnering a second-place finish in this division. Way to go, ladies! And special thanks to Kathy Woys (IronOaks) and Peggy Martin (Cottonwood) for stepping up to co-captain and make this happen!

Also competing was another new team, 3.0 mixed, Pickle Partners. Sandy Lauring agreed to captain this team, and while their finish was not as good as they hoped, again, it was their first league experience, and they had a lot of fun and met many new players.

The 3.5 players were able to form three separate teams: the men’s O.G.R.E. (Old Guys Rule Everything), IronOaks248 Mixers mixed doubles team, and women’s Volley Girls. Players from each of these teams also competed on one or more teams. O.G.R.E had a 4 win/6 loss season, Mixers ended with a 0 win/9 loss record, and the Volley Girls tied for second with 5 wins and 4 losses, but lost in overall standings by 23 points. Kudos to Roger and Chris Koski, co-captains of the Mixers; Steve Newkirk, captain of O.G.R.E; and Rhonda Stanford and Linda Shanahan, co-captains of the Volley Girls. Thank you, all, for your time, effort, and dedication to league play!

To learn more about APPL and EVIL, please go to their website arizonapickleballplayersleague.org for more information.