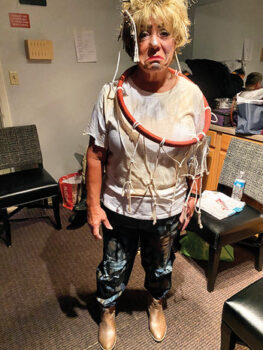 Ginger Henry after plugging in one too many strings of lights

If you missed The Last Round-Up of the Guacamole Queens at Cottonwood’s San Tan Ballroom, you missed some hearty laughs! From the beginning scene of the local access TV spot (with dozens of viewers and hosted by a very southern Merrie Crawford) to the fire ants free-for-all at the end, the show was one antic after another.

Set in Sweetgum, Texas (accents, by the way, were spot on), the Verdeen cousins were doing their best to keep their shop, The Wide Bride, in business while simultaneously planning the very last high school reunion ever to be held at Sweetgum High.

Everyone in the cast was terrific—each role an outstanding performance. Joyce Recupido who played Peaches Verdeen was particularly good as the mortuary cosmetologist whose dates kept canceling on her. Her cousin Gaynelle, depicted hilariously by Phyllis Novey, celebrated her ex-husband’s funeral with a table dance. Jimmy Wyvette, expertly portrayed by Ginger Henry, tried valiantly to save the reunion in spite of the school being blown up, a sink-hole opening up, and her Uncle Aubry (comically delivered by Lew Crawford) trying to hook up with two different elderly ladies at the same time (well delivered by Sandy Pallett and Sharon Gerdik). Throw in a self-righteous aunt, played to the hilt by Sally Holberg, who insists she’ll be elected the last Guacamole Queen, and the laughs just kept rolling. Paco Venegas was a treat as Dewey, the scorned former classmate who had an alter-ego puppet on his arm at all times. The town simpleton Raynerd (deftly portrayed by Greg Posniak) and Grover, the sheriff (brought to life by Jim Janowski), were on hand to witness all the uproarious shenanigans. Mary Vandergriff perfected the Tammy Faye-inspired Dixie Davenport as well as the governor’s assistant, Tanzie Lockhart.

All in all, Sandy Bocynesky did an exceptional job directing this accomplished group of actors. Congrats to the cast, the stage, sound, light, props, costume, and make-up teams for bringing a blow-out of a show to Sun Lakes theater lovers. Well done!