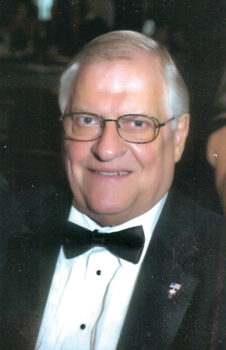 Marcel Baadte is a distinguished senior member of the Council, having served as Grand Knight, Faithful Navigator of the Fourth Degree Assembly (four years), coordinator of the Ice Cream Treats for VA Patients program (6 years), and current coordinator of the Seminarian Fund, wherein two prospective priests from the Phoenix Diocese are given financial aid by the Council. Marcel is a native of LeMars, Iowa, a small town of 10,000 which calls itself the “World’s Ice Cream Capital.” After high school, he earned a B.A. in marketing and an M.B.A. from Rockhurst College in Kansas City, Mo. He started his career in management as an Air Force Reserve Loadmaster on C130s and C124s for six years. He later directed extensive warehouse operations for the veterinary products industry and finished his career as general manager for the Tractor Supply operation in Omaha, Neb. After taking an early retirement, Marcel and his wife of 55 years, Sandra, moved to Sun Lakes, where they joined St. Steven’s Catholic Church. In 2003, he became a member of the Knights; “One of the best decisions I ever made—the brotherhood of the Knights has been most rewarding, both in personal growth and our relationship as a Christian couple!” he said. The Baadtes have five children and 11 grandchildren, “scattered from Florida to California, who we try to visit as much as possible,” he noted. “The Knights of Columbus is a very rewarding experience for both young men as well as us seniors—I highly recommend joining!” For information on how to become a Knight, contact Jim Bach at 480-710-9931.