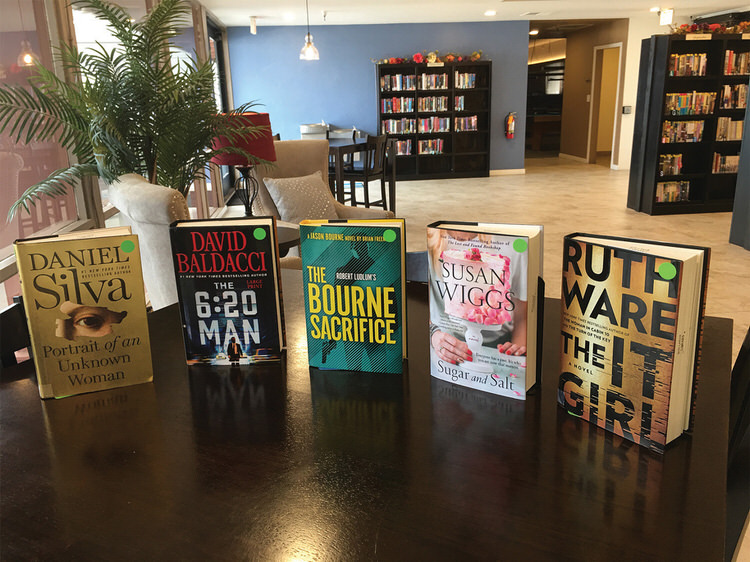 September is here, and we’ll soon be cooler. In August, the library purchased the following novels for your enjoyment. Please stop in to see us.

1. The 6:20 Man, by David Baldacci. Since I’m a fan of his work, I quickly took advantage of our library.

A cryptic murder pulls a former soldier turned financial analyst deep into the corruption and menace that prowls beneath the opulent world of finance in this new thriller. A wonderful character, Travis Devine, travels via the 6:20 train to work every day. Out the window on his passage he sees the palace of the head of the company and a beautiful, young woman in a bikini.

Sara Ewes, Devine’s former girlfriend and coworker, is found hanging dead in a storage room of their office building. Why does the NYPD come calling very shortly to Travis’ home? I enjoyed this novel from front to back.

2. Sugar and Salt, by Susan Wiggs. I have not read this new addition, but from the book flap: “Jerome ‘Sugar’ Barnes has learned the art of baking in his grandma’s bakery, also called Sugar. When the restaurant that shares his commercial kitchen loses its longtime tenant, a newcomer moves in; Margot Salton, a barbecue master from Texas. Margot takes to Jerome’s grandma, and the old woman proves to be a good mentor. Margot is drawn to Jerome, and their attraction is mutual and powerful, but Jerome worries that Margot will move on once she feels peace and stability. Just as Margot starts to relax into a happy new future, her past comes back to haunt her ….” Romance and Mystery?

3. Robert Ludlum’s the Bourne Sacrifice, by Brian Freeman. My husband and I were Ludlum fans for many years, and the Jason Bourne character and movies were his favorites. This third book of a trilogy adds to the interest and gives you the opportunity to read and use your own imagination, which I believe is always the best!

4. Portrait of an Unknown Woman, by Daniel Silva. Mr. Silva is a very accomplished author of the spy thriller genre, and his books are published in more than 30 countries and are Best Sellers around the world.

5. The It Girl, by Ruth Ware. This is an unputdownable mystery. A woman on the search for answers a decade after her friend’s murder. A thrilling feminist dystopian novel set in an alternate 1950s Britain under control of The Third Reich….

Goodreads gives this four out of five stars.

I start to think of planting in September, and I mean just thinking! Ha ha! Happy Reading!