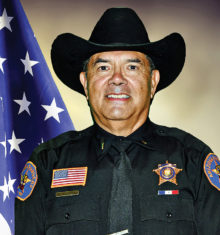 Carlos Lozano was born in Bogota, Columbia, and came to the United States in 1963. He enlisted in the United States Navy at age 17 where he went on to serve for 34 years. While in the Navy, Carlos was selected for a program which allowed him to attend the University of Texas where he earned an Aerospace Engineering degree and consequently a Navy commission as an Aerospace Maintenance Duty Officer. He retired as a Captain and subsequently earned a Master’s degree in Organizational Management from the University of Phoenix.

In 2010, Carlos moved to Arizona to be closer to his daughter and grandkids. He later became a member of the MCSO Sun Lakes Posse, a Chandler Police Department volunteer, and most recently, an Arizona Ranger.

Carlos is currently a lieutenant with the Sun Lakes Company and serves as the Internal Affairs Officer. He gets his inspiration to serve from one of his favorite presidents — John F. Kennedy, who said, “My fellow Americans: Ask not what your country can do for you — ask what you can do for your country.”

If you would like more information about the Arizona Rangers-Sun Lakes Company, contact them at [email protected]